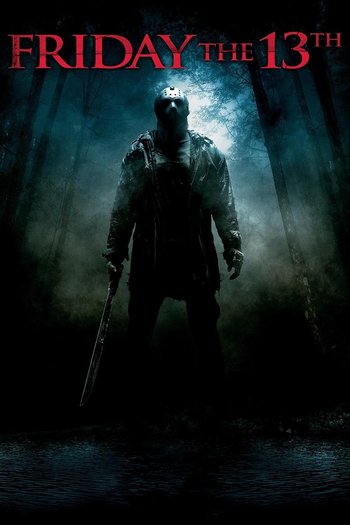 He's back. The man behind the mask.
"Welcome to Crystal Lake."
— Tagline
Advertisement:

Like many other horror franchises, Friday the 13th got rebooted in the 2000s. This film carries no subtitle or numerical marker as a result, but is the eleventh film in the series (twelfth if one counts Freddy vs. Jason as a part of the franchise).

Rather than a straight retelling of the original, this film takes place in the present and is more of an Adaptation Distillation of elements from first four films while retaining the basic premise of a group of teens who've decided to spend their summer vacation at a lavish house situated near Crystal Lake. It also features a Jason Voorhees who is restored to a more human level, whose improved intellegence and savvy allows him to set traps and stalk his victims instead of reaching for the nearest sharp object (though his trademark machete is ever present).

The film did well upon release, with a global box office of $65,002,019 against a $19,000,000 budget. Fans especially praised new Jason Derek Mears for his more sinister take on the character. However, as of 2022, a planned sequel to this film currently sits in Development Hell.

Friday the 13th (2009) contains examples of the following tropes: