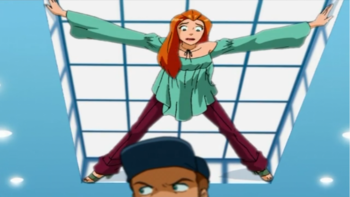 Security is not hatless.
"What Baloo had said about the monkeys was perfectly true. They belonged to the tree-tops, and as beasts very seldom look up, there was no occasion for the monkeys and the Jungle-People to cross each other's path."
— The Jungle Book
Advertisement:

In real life, human vision covers a substantial arc (roughly 60° horizontally toward the nose, 100° away, 60° up, and 75° down.) Try it: Inside a building, look straight ahead, and see how much of the ceiling you can see while looking straight ahead and not at the ceiling—quite a bit, except for the part directly over you.

This tends to get ignored in fiction. Someone can see things that are directly in front of them, but it's easy to hide on the ceiling, to the sides, or even up in the air if you can fly. This may also be related to the Rule of Perception and Behind the Black, since as long as the audience can't see the ceiling, it's assumed that nobody can.

There may be some real-life support for the idea of not noticing things on the ceiling. After all, in nature the only thing that will be above you is the sky and maybe a few birds, which are very rarely dangerous predators that you need to avoid. Police and military training spend a great deal of effort on teaching trainees to check "Up" when they are searching or entering an area. On the other hand, fiction tends to apply this to things which would be much more obvious than a typical sniper (who by definition is trying to stay hidden) or ceiling bloodstain. There's really no reason why Spider-Man should ever be able to hide on the ceiling unless it's either 40 feet high or a really small room. In fiction people may even ignore moving objects that aren't directly in front of them, despite the fact that peripheral vision is sensitive to motion.

However, peripheral vision is different to different people. Some people, and in fact a great number of people, pay no attention, or don't even register things that are outside of their direct line of sight. As such, unused peripheral vision can sometimes be justified in fiction if the hidden person or object is close to the border of what one's eyes can cover.

A variation happens in video games where things can be hidden on the ceiling. The Player Character, in real life, would be able to notice most of them casually. But the display seen by the player doesn't have much peripheral vision, being locked in by the frame of their monitor, so the player can't see them normally and must purposely look up. Most players don't do this much. This is why third person cameras are usually seen as Acceptable Breaks from Reality, as they give back some of the awareness a real person would be expected to have. Some more hardcore first-person games do allow to enable a wider field of view — with a fish-eye camera effect or even a multiple-monitor setup. Note that some games justify the tunnel vision effect by putting the player in a full-face helmet. Conversely, Video Game A.I. is often similarly limited to very narrow vision cones, especially in stealth games to make it easier for the players to sneak up on them.

This may cause a character to miss a Ceiling Corpse. Compare 1-Dimensional Thinking, where fleeing characters could avoid mishap by stepping aside rather than continue rushing forward. Also compare Failed a Spot Check, where peripheral vision isn't necessarily the issue but something goes unnoticed anyway.