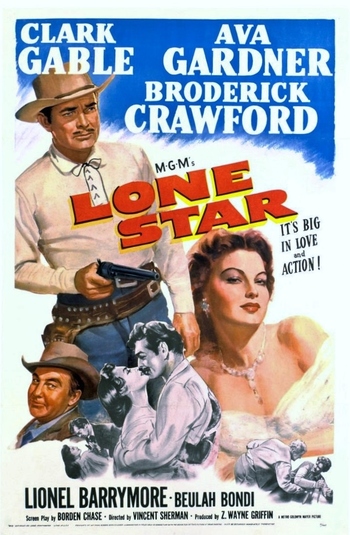 It's 1845, and the status of the Republic of Texas is very much in flux. Mexico still wants it back, and within both Texas and the United States there is a lot of wrangling as to its future. Expansionists such as ex-President Andrew Jackson want to bring Texas into the Union, while some in the United States are resisting adding a slave state and some in Texas prefer independence.

Andrew Jackson, who seems to be heading the pro-annexation campaign — President John Tyler must have been taking a nap — receives some disturbing news. Reports from Texas are that Sam Houston, former president of the republic and still the most influential man there, has come out against annexation.Jackson commissions one Devereaux Burke (Gable), Texas cattleman, to head back home in hopes of contacting Houston and getting him to change his opinion, which will likely be decisive.

Burke makes it to Austin, where he meets anti-annexation leader Tom Craden (Crawford) and Craden's girlfriend Martha Ronda (Gardner), who runs the local paper. Both Tom and Martha are very much against Texas joining the United States, Martha because she fears war with Mexico, and Craden because he wants to be president of Texas. Martha starts to develop feelings for Burke which complicate her political loyalties. Tom for his part is willing to go to some extreme, violent ends to stop annexation.