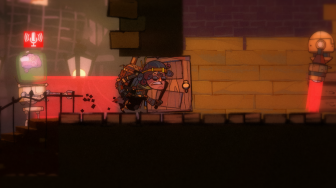 Oh, No... Not Again!
Advertisement:

The year is 1849, in a technologically advanced England. Scotland Yard is 100 days away from bringing online the Devil's Basilisk, a Master Computer that will turn the entirety of England into a surveillance state.

Naturally, this concept is simply unacceptable for thieves, who might have to give up being thieves! So the plan is hatched: steal the Devil's Basilisk before it's finished.

The downside is that you need a very high security clearance to get to Scotland Yard, and you start with no money in a zeppelin above the Slums.

Cue 100+ levels of stealth-platforming around procedurally generated locations, hitting mechanical guards in the back of the head with a stick, hacking computers, planting bugs, blasting holes in walls...and running like hell should you get spotted.

Tropes present in The Swindle include: