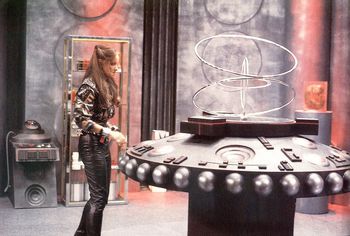 "Once I've gotten the Doctor right where I want him, I'll destroy every fibre of that cursed, colourful coat!"
The Master: Ah, but you've not been informed of my purpose here.
The Rani: Oh, I know why you're here. To destroy the Doctor. You've never had any other. It obsesses you, to the exclusion of all else.
The Master: You underestimate me. Certainly I want to destroy him, see him suffer, but that is just an exquisite first step. I have a greater concept, one that will encompass the whole human race!
Advertisement:
The Rani: You're unbalanced. No wonder the Doctor always outwits you.

The one where the Master gets kneed right in the ol’ timespheres.

This story was NOT brought to you by the tourism boards of Gallifrey or Miasimia Goria.

Written by Pip and Jane Baker. This two-episode serial first aired from February 2—9, 1985.

We open with a bunch of grubby miners from Oop North, going to the bathhouse after a long day's work. The old woman who runs the place herds them into a room - where poison gas suddenly comes up from the floor and knocks them all unconscious. Meanwhile, the Sixth Doctor and Peri are in the TARDIS, which is being pulled off course by a "time distortion". Both Colin Baker and Nicola Bryant massacre American accents as the Doctor establishes that the only person who could pull the TARDIS off course like that is a Time Lord (or a Dalek, but we're pretty sure it's a Time Lord). Back in the bathhouse, two gas-masked mooks carry the unconscious miners into another room, mysterious red marks appearing on their necks. In a serial called "The Mark of the Rani". Hmmmm, can't imagine what those are.

The Doctor and Peri land in what we'll learn is Industrial Revolution-era Killingsworth, and set off to track the time distortion. The miners from the bathhouse have apparently been brainwashed into homoerotic behaviour and small-child kicking, which is an improvement on Peri's dialogue. She makes a valiant effort to convince us that she's A) intelligent, with her specialty in botany and B) insightful, talking about extinction and the effect of technology on the environment, but despite her hideous dress covering up her two best assets, it's not working. Her obliviousness extends to the Doctor, who notices there are no birds, but completely fails to notice the blatantly-moving scarecrow Peri points out. Those of us who have seen the Master before know random disguises are his hat, so clearly, we've got at least one renegade Time Lord hanging about.

The brainwashed miners come upon a piece of equipment being hauled into town, and attack it, though not before the Doctor and Peri have witnessed them - and the strange mark on their necks. The equipment belongs to George Stephenson

, the famous engineer who built England's first railway line. And just in case anyone was ambivalent about what significance the scarecrow Peri pointed out might have had, the next shot is of the scarecrow spying on the Doctor and Peri, hopping a fence to follow them, and letting out a very distinctive chuckle. Oh, it's definitely the Master - he's stalking his favourite enemy.

The mysterious woman who runs the bathhouse hijacks a local kid to do her bidding (and unfortunately, her accent leads to Colin Baker on the DVD Commentary asking "what part of Jamaica" she's from), and a close-up reveals that the makeup people totally forgot about half of the prosthetic Kate O'Mara wears in the rest of her scenes. The Doctor and Peri ride by on their way to see Lord Ravensworth (the local landowner), and his timey-wimey detector goes haywire when it's pointed at the bathhouse and the rapidly-becoming-obvious woman who runs it. Detects a Time Lord, you say? And there's a mysterious woman lurking about, experimenting on people and generally being very suspicious? No, couldn't be a certain fellow renegade classmate of yours who's got this Thing for experimentation and a serious lack of morals. Six is not one of the more observant of Doctors.

More workers (we're just going to start calling them Luddites, because that's supposedly what she's turning them into) show up at the Rani's the mysterious woman's bathhouse. She follows them in, and the Master, brushing straw from his clothes, spies on her for a bit, then goes back to stalking his other ex. There is much blah-blahing from the Doctor and Peri trying to bluff their way into a meeting held by Stephenson (which will be attended by a number of other historical geniuses and men of learning), but they eventually get in to see Lord Ravensworth - who, despite not being a historical genius, has to do something in this plot to justify Terence Alexander's casting. The Doctor and Peri bicker and the Master continues to be the most blatant stalker in history, and a bunch of Luddites mistake the Master (with his thing for black velvet and big vocabulary and anachronistic gadget that looks like a vibrator) for one of the geniuses attending the meeting, but he sends them after the one in the "yellow trousers and a vulgarly-coloured coat".

They corner the Doctor by what appears to be a simple mineshaft, but when one of the Luddites falls in, suddenly transforms into something resembling the Bottomless Pit of the Underworld. Peri screams and throws rocks at the Luddites, but the Doctor is saved by a timely gunshot from Lord Ravensworth, who's actually kind of badass, and really not at all pleased with gatecrashers to his meeting. He and the Doctor establish that the personality changes in the Luddites are only among the men, and the Rani the mysterious woman in the bathhouse obliges by showing us her experimentation on two new subjects, with a close-up on a device attached to the neck area - the source of those marks popping up in the dead Luddites.

And thankfully, the Master decides to pay the Rani a visit, establishing who the villains are and freeing the show from pretending the woman in the bathhouse is anyone other than the Rani. He interrupts her, she dispenses with the disguise, and within five seconds, they're bickering like an old married couple. We get some lovely exposition about how brilliant the Rani is, how she's been exiled from Gallifrey for experimenting on the Lord President's cat, and the fact that she really, really kind of ships Doctor/Master. She tells them, in essence, to get a room, and he tries to sweet-talk her into teaming up with him, and when the niceties don't work, outright blackmails her by stealing the only vial of brain fluid she's got (she needs the fluid for her aliens on the planet she rules). The brain fluid becomes the MacGuffin invoked every time the Rani has to do something completely counter to her established amoral, rational, and scientific nature.

The Master and the Rani continue their labyrinthine, overcomplicated plan. They utilize tree mines (because the Rani has clearly read the Evil Overlord List and knows mines are the sneakily evil way to go), evil laughs done in counterpoint, and the ever-popular "distract the dumb American with your weapon of choice and knock her out" ploy, but the Master's stupid obsession with trying to kill the Doctor overrides the Rani's common sense. His pride gets them trapped in her TARDIS, which has been futzed-with by the Doctor to send them to the end of the universe with a rapidly-growing T-Rex embryo (because everything's cooler with dinosaurs). The Rani is not pleased, and gives the Master a knee to the bollocks for his trouble, but unfortunately, is still stuck with him in a runaway TARDIS with a meat-eating dinosaur. At the end of the day, she's just not very good at her job.

This serial is significant in a rather surprising way. Despite the "celebrity historical" being a regular feature of the revived series that happens at least twice every season, George Stephenson was the first real historical personality to appear in the series since the various Dodge City figures in "The Gunfighters" all the way back in 1966note Well... Gray the solicitor in "The Highlanders" was a historical figure too, but a long way from "celebrity", being basically an original character attached to an extremely minor historical figure. And King John showed up in "The King's Demons" but of course it wasn't the real King John.. This story was also the first to mix a real historical celebrity into an aliens'n'monsters plot, an idea so obvious it's surprising to realise they only started doing it in 1985.