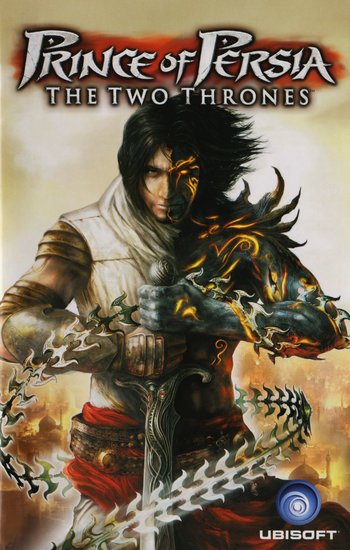 Prince of Persia: The Two Thrones is a game released in 2005 to conclude the trilogy that began with Prince of Persia: The Sands of Time and continued with Prince of Persia: Warrior Within. It returned somewhat to the original's fairy-tale tone (with the arrogant Prince as a "dark side" of the character). It retained the basic combat changes made in Warrior Within with minor adjustments, but toned down the graphic violence. As well, the Prince was much more likable, and even had regrets over his behavior in the previous game. Again following the events of the previous game, the Prince returns to his home Kingdom of Babylon only to find war erupting and enemies everywhere. He learns that messing with the timeline so much has skewed any sense of proper history and the Vizier of the first game is still alive. Seeking to complete his original goal of the first game, the Vizier unleashes the curse of the sands once more, this time partially corrupting the Prince himself. Finding a darkness within himself that transforms him into a dark creature, the Prince seeks to stop the Vizier once more and return things to their proper state.

Penny Arcade made an eight-page comic