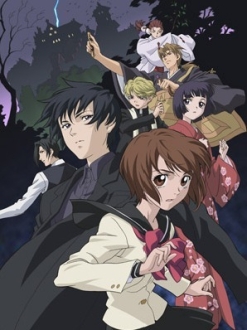 So a Priest, a Monk, a Shrine Maiden, and a paranormal researcher walk into a haunted house..."
Monk: It seems like the origin of the curse wasn't the roku-bu spirits.
Naru: It's the Okobusama, isn't it?
Mai : H-How did you know?
Naru: Because my brain's better than any of yours.
Advertisement:

Mai Taniyama, an Ordinary High-School Student, accidentally breaks a camera left in an abandoned school building. The camera later turns out to belong to Kazuya Shibuya, a.k.a. Naru, and in order to repay him for the camera, she must take the place of his injured assistant in Naru's perfectly-legitimate ghost-hunting business.

Mai and Naru are accompanied by an Australian Catholic priest, a spirit medium, a Buddhist monk, a self-styled Shinto priestess, and Naru's really tall and really quiet assistant Lin. The series was originally published as a series of novels by The Twelve Kingdoms author Fuyumi Ono; it was later adapted into a manga, and then a 25-episode anime. A manga adaptation of the relatively-unknown sequel "Akumu no Sumu" was recently announced, and is being released on a bimonthly schedule.

Not to be confused with Ghost Hunters, the American live-action TV show.

This anime/manga provides examples of: