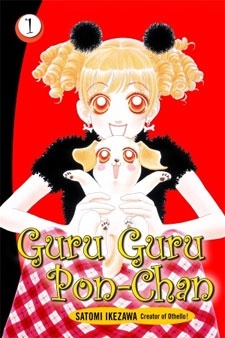 Guru Guru Pon-chan is a manga series created by Satomi Ikezawa, the creator of Othello.

It tells about a Labrador Retriever pup named Ponta, the Koizumi's family pet and trouble maker. One day, Grandpa Koizumi creates the Guru Guru Bone in order to make animals speak in English. When Ponta eats it, she turns into a little human girl. Ponta runs outside and meets Mirai Iwaki, the most popular boy in his school when he saves her from almost being hit by a car, falling in love with him at first sight before puking up the Guru Guru Bone and running away. Realising that she has fallen for Mirai, she resolves to become human so they can be together. By the time she recovers the Bone (which Mirai kept) she's aged enough that when she kisses it she takes the form of a cute teenage girl. Mirai likes her even after finding out she's a dog, but questions whether a relationship between human and canine can ever work, or whether he's doomed to become known as "the pervert who does it with dogs". And so their bumpy relationship begins...

The series ran in the shoujo magazine Bessatsu Friend from 1998 to 2000. The manga's chapters were compiled into 9 volumes, which were released in English by Del Rey Manga. A 4 volume spin-off sequel called Guru Guru Pon-chan Okawari ("Second Helping") was released several years later, which focused on a girl with a male chihuahua who becomes human instead of the original characters.