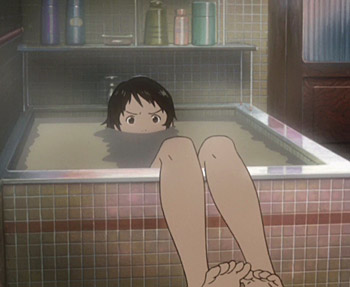 Furo Scene is a bathing scene involving the use of the Japanese style of bathing mostly for the purpose of Fanservice. A furo is a Japanese bathing tub similar to the Western hot tub; it is not used for washing but for soaking and relaxing. Most homes in Japan, and even some apartments, have one; they are usually big enough for two or more persons to bathe together. Bathing in public baths, called "sentou", is a common social activity, although it is typically sex-segregated. The process of a Furo differs from western-style bathing: the entire household uses the same bathwater, but keeps it clean by first showering and washing off outside of the bathtub and then getting in solely for the purpose of relaxation.

It is also done in the nude, which is where fanservice comes in. A Furo Scene, like a Hot Springs Episode, is an excuse to show the female members of the cast sans clothing. It is also an easy excuse for the Skinship Grope and Naked People Are Funny, or maybe just some Bathtub Bonding. Another version is to have one or more characters sitting on a stool outside the bathtub while one either washes the other's back or hair (Censor Suds is more likely to be used as censorship in the former case while for the latter it would be a Modesty Towel).

The Furo Scene is so common in anime there is even a wiki that catalogues them.