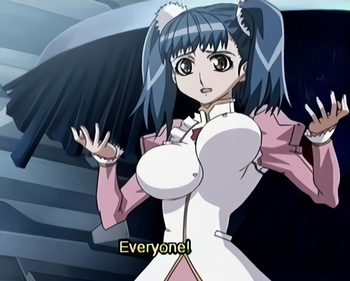 One shall stand, one shall fall...
"Every single movement just sends boobquakes, or waves of boobquakes all around the place, it's just... Why does it have to be so jelly? I would very much prefer the boob jiggles if they were a bit less over-the-top because... *sigh* Those seem to be made of some kind of... well, corn starch liquid? Ehn. Jello. Jello everywhere."
— Skallagrim, playing Senran Kagura
Advertisement:

The technique of drawing a female character with large, shapely, buoyant breasts and without a bra, then animating every individual jiggle, sway, bounce and wobble they undergo.

The motion displayed is often asynchronous — each breast is animated separately and possesses its own individual movement. Their mass and elasticity may be so ridiculous that they defy physics by Rule of Sexy, lurching and heaving in ways that are unrealistic or outright impossible.

Closely related to Gag Boobs, as this may happen by Rule of Funny as well as Rule of Sexy. If the animation is exaggerated or silly, it may be accentuated by Stock Sound Effects to make it seems like a character's bouncing boobs are made of rubber or propelled by springs.

Also known as Gainax Bounce or the Gainax Bounce Effect. The term was coined by fans some time before 1993 and makes reference to the anime production of Studio Gainax, many of whose earlier releases made use of this particular variety of Fanservice. According to a Usenet post from 1993, one particular busty young woman from the Gainax anime Otaku no Video inspired a tongue-in-cheek unit of measurement for Gainaxing: one full bounce is apparently equal to one "Misty May".

In Real Life, a woman's breasts can bounce or jostle, usually as a result of physical activity and especially if they are large. However, this experience can be inconvenient, uncomfortable, or even painful. Compare D-Cup Distress when the Surprisingly Realistic Outcome of this awkwardness is acknowledged.

A Pec Flex is a variant of this done by a muscular male character. For a live-action TV series that exploits this, see Jiggle Show. For real-time generation of jiggling movement in video games, see Jiggle Physics.

Do not confuse this with a Gainax Ending (where it's the individual parts of the viewer's brain that gets contorted in different directions).

Movie 7 is infamous for the way Nami's boobs seem to have a life of their own. This is just a small sample.

Movie 7 is infamous for the way Nami's boobs seem to have a life of their own. This is just a small sample.