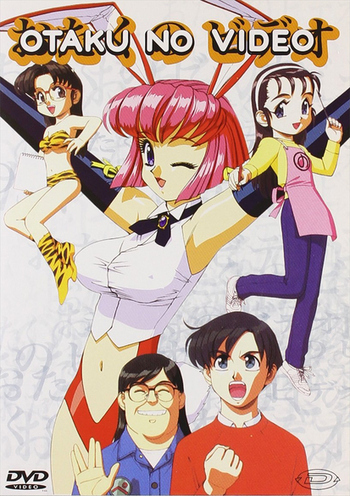 "Hey... are we really that depressing? Are we really that weird? Is it a crime to love anime or SFX movies? Why should it be a reason to set us apart? If you're into playing tennis, that's just fine and dandy, but if you watch anime, you're weird? Why?! I quit! No more job-hunting for me! If otaku are going to be discriminated against, then so be it. I'm gonna become a total otaku! I'm gonna be not just an Otaku but the Otaku of otaku... Otaking!"
— Kubo
Advertisement:

Otaku no Video is a legendary 1991 Studio Gainax two-episode OVA telling the story of Kubo, a college student in 1982 who is drawn into a group of otaku (people with obsessive hobbies such as anime) by his old high school buddy Tanaka. He eventually becomes just as obsessed as the others, and—after being dumped by his girlfriend Ueno—sets his sights on becoming the ultimate fan: the OtaKing!

Despite the rather warped-sounding premise, this is actually a youth drama, which ends with what is either a world-changing epiphany or an uplifting Dream Sequence. Interspersed among the animated footage is a live-action mockumentary, Portrait of an Otaku, in which several different types of Otaku (Sci-Fi, anime, model guns, garage kits, etc.) are interviewed about their lifestyles.

The show itself has been dubbed by many as the "Bible of Otaku", explaining many strange concepts to anime fans who are just starting to test the waters while entertaining dedicated otaku with many Shout Outs. The animation is high-quality, and the sharp-eyed fan can spot literally dozens, maybe hundreds, of references to almost every pre-1980s anime, with a handful of early 80s shows. Despite the occasional tongue-in-cheek approach, the story is surprisingly serious, and many believe that it is a fictionalized autobiography of the key members of Gainax.

As an aside here, American anime fans call themselves "otaku" as a perverse mark of pride, and many of them are under the impression that it means "enthusiast". Well, close, but no cigar. The difference between an enthusiast and an otaku precisely lies in the obsession with the medium that reaches unhealthy levels. Thanks to some heavily publicized news reports, in Japan, the word is often used in an extremely insulting way (bordering on obscenity). Many think of "otaku" as someone who's not simply so obsessed with something that he refuses to leave his home, but someone who's actually mentally ill. By contrast, the American usage is little more than a synonym for "geek", a word that is itself also being heavily criticized for a similar appropriation amongst the mainstream American population.

However, this has been reversing itself in the past few years (see here

). Otaku No Video shows both sides, but in the end, comes down on the side of otaku pride.

Either way, be advised that calling yourself an "otaku" in front of Japanese people is likely to result in spit takes or worse.

This is the OVA from which Otakon, a prolific North American anime convention, takes its name. By con tradition, it is both the first and last video shown every year.