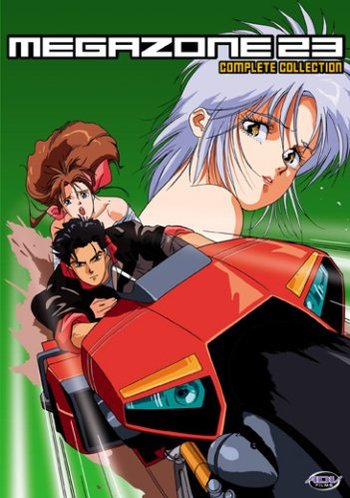 Teenager Shogo Yahagi is a motorcycle nut with few cares in the world; he and his friends do little more than ride around and have fun. This all changes when one of his older friends shows him a mysterious, incredibly-advanced motorcycle called the Garland, which ends up in Shogo's possession soon after a mysterious cabal of men in black demonstrates they're willing to do anything to get it back. The Garland is far more than it seems; as Shogo discovers some of the secrets hidden in the bike, they lead him toward even more secrets; secrets that will completely change his understanding of the world he lives in.

Now if only he and his friends can survive his discoveries...

Released between 1985 and 1989, Megazone 23 is historically signficant for being one of the very first OVAs and also was one of the first anime to extensively interweave music with the plot. The story itself was a mindbender at the time, and is a forerunner of such later American works as The Matrix and Dark City. Since then, the plot twists and the character types have become standard in anime, almost cliche in some instances, but as a certified classic it is still worth seeing.

The original American distributions of Megazone 23 were anything but impressive. The first part was briefly released in North America by Harmony Gold and The Cannon Group as Robotech the Movie. Originally, Robotech the Movie was intended to be handled like the Macross Saga of Robotech: otherwise similar to the original with the exception of music and dialogue changes to fit the Robotech setting. It was also intended to be a parallel story to the Macross Saga. However, Tatsunoko Productions was promoting Macross: Do You Remember Love? the same time and insisted that Carl Macek not use Macross elements to avoid confusion.note This is in spite of Macek originally wanting to adapt Do You Remember Love to the Robotech setting but getting shot down, which lead to Megazone 23 being used in the first place. (The Cannon bosses also wanted less female characters and more robots & guns and weren't fans of Megazone's downer ending.) As a result, Macek crudely spliced in footage from Super Dimension Cavalry Southern Cross to force a linkage between the two shows and commissioned animation studio The Idol Company to make a new Robotech compliant ending. Of course, the Macek dub script replaced the original dialogue, which was barely connected to the original Megazone 23 or the Robotech setting. The film is no longer considered part of the Robotech canon and, unlike the original Megazone 23, the chances of a future home video release with better quality are considered very low.

Macek and Harmony Gold also produced a dub of Part 2 (with a different cast and set of character names), which was only released in Japan as an aid for teaching English. (It also used footage of the alternate ending for Part 1 that was produced for the Robotech movie as a prologue). Streamline Pictures later produced a straight dub of Part 1 with the same cast as the International Part 2 (but Japanese character names), but couldn't release Parts 2 and 3 due to their financial problems and inevitable shutdown. Later, Manga Entertainment released an un-butchered version of Part 3 for the UK on VHS, but the result, reportedly, was still horrendous.

For decades, only bootleg fansubs of the original show were available in America, but it was rereleased with a new English dub in the summer of 2004 by ADV Films.

Megazone 23 was revived in 2007 with a Playstation 3 RPG game, Blue Garland; the game takes place in an Alternate Continuity that diverges after Part I, and revolves around Hiroto Takanaka, the son of heroine Yui.

In September 2019, Animeigo successfully funded a Kickstarter campaign to release the Blu-Ray remasters of the series, also including the existing English translations — even the "International" Harmony Gold dub of Part II, as well as a remastered version of the Robotech The Movie original footage used by it. This "Omega Edition" release finally began shipping in March 2021.

Not to be confused with MegaZone.note Brian Bikowicz, the co-author of Undocumented Features, legally changed his name to MegaZone because he was such a big fan of this anime.