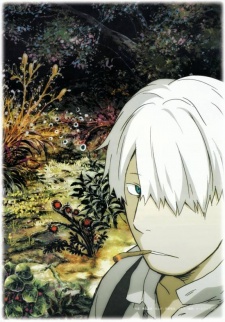 Neither good nor evil, they are life in its purest form. Vulgar and strange, they have inspired fear in humans since the dawn of time and have, over the ages, come to be known as "mushi".
Advertisement:

Mushishi is a seinen manga that ran from 1999 to 2008 in Monthly Afternoon by Yuki Urushibaya. It was adapted into an anime that ran for 26 episodes, ending in mid-2006. The spring 2014 anime season saw a sequel series, Mushishi Zoku-shou, running for an additional 20 episodes. Three OVAs were also made: two in 2014 and one in 2015note The final one, "Suzu no Shizuku", is technically classified as a movie as it had a theatrical run, however it looks no different than any other episode. Most episodes are stand-alone stories, though a few interconnect with other episodes in an oblique manner.

Ginko is a mushishi — a person who can see the small pseudo-nature-spirit entities known as mushi, which both mystify and plague mankind, and whose profession is to investigate them. With little more than his wits and experience to guide him, Ginko walks the earth (or more specifically Japan) helping humans who have become unpleasantly entangled with the mushi. The mushi themselves are rarely sentient and occupy a nebulous zone between things that can be identified as life forms and things that cannot, such as a swamp that travels from location to location, or tiny heat-absorbing microbes. Usually the motivation for the mushi is as simple as survival or reproduction, such as a sound-eating mushi infecting a human, causing deafness. However, because of their mystical properties, they tend to cause a variety of troubles when they interact with humans.

The series was born from two short story comics Urushibaya wrote under the pen name Soyogo Shima: "Azure Music" and "Banquet on the Rooftop". These stories were collected into the 1997 compilation Bioluminescence and its edited 2004 re-release Filament.

. See also Neko ga Nishi Mukiya by the same author, a Spiritual Successor of sorts set in the modern day.