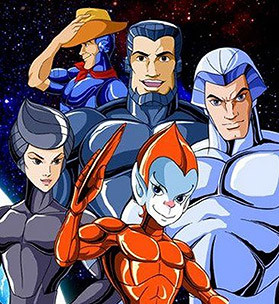 SilverHawks is sort of a mashup of ThunderCats (1985) (IN SPACE!) and Science Ninja Team Gatchaman. It's a Rankin/Bass Animated Series from 1986 that shares most of its producers, creative teamsnote including Pacific Animation Corporation and their four uncredited subcontractors and Voice Actors with its predecessor.

The SilverHawks, the "partly metal, partly real" space law-enforcement for the Limbo Galaxy (which wasn't much bigger than a solar system) oppose The Mob, run by the evil Mon*Star.

Now has a character page, currently under construction.

were produced for the collectors' market, followed by the announcement

of a revival of the animated series.

Wings of silver, tropes of steel/SilverHawks!!