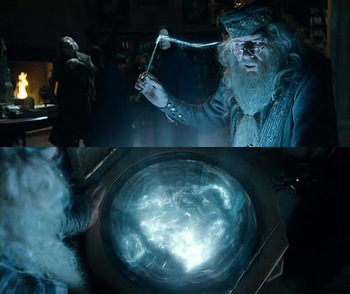 This trope is when an object becomes imbued with the memories of a character, allowing others to gain these memories in a Pensieve Flashback or Exposition Beam. The "Jar" may be single use or reusable, and while it is often made intentionally either as an awesome form of journaling or diary keeping, it's entirely possible for it to be made unintentionally. In those cases, it's probably a psychic or wizard using a form of touch based Psychometry to find out the history of an item.

In some cases, the memory jar can potentially be a complete record of a character's memories, becoming both a biography and potentially a "restore point" if their memories are damaged or a clone has to imprinted.