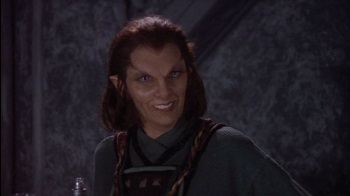 "Are you serious? This woman made the Duriam Massacres look like a church picnic, and now Earth wants to give her a grant?"
—Garibaldi
Advertisement:

Talia Winters is surprised to be approached by Ambassador Kosh. He tells her that he has a job for her, and to meet him in Red 3, "at the Hour of Scampering."

Na'Toth is in the docking area, when she sees a feline-looking individual. She walks up to said person and begins pummeling her, screaming, "Deathwalker!" Security eventually pulls her off her victim. Some time after, Sinclair is briefed by Garibaldi, who notes the name Na'Toth was yelling, one that both of them recognize. They go to question Na'Toth, who tells them Deathwalker used her grandfather as a lab specimen when the Dilgar invaded his world, and that after that her family swore a Shon'Kar blood oath, meaning that if any of them encounter her again, they will be compelled to kill her. G'Kar asks that Na'Toth be released into his custody, but Sinclair puts her under house arrest. He orders Garibaldi to search the woman's ship for confirmation that she is indeed Deathwalker.

Talia has met with Kosh, saying that clearances and pay, a generous one, have been confirmed, but that she doesn't really understand. Kosh replies, "Understanding is a three-edged sword." Kosh's contact, Abbut, soon arrives, calling Kosh an "old dog" for bringing a date. Talia explains her presence and proceeds to scan him. Curiously, she finds he has no thought. They then proceed with their business.

In Medlab, Franklin is looking after his patient when Sinclair arrives. Together, they review the Earth Force record on Jha'dur, the Dilgar known as Deathwalker. After a lengthy list of atrocities, Franklin notes that this woman must be someone else; she's too young to be Jha'dur, too old to be her daughter, and there is no evidence of any prolonging processes. Garibaldi shows up holding a Dilgar uniform with the rank of Warmaster, Jha'dur's rank, from among her possessions. He also brings some sort of drug. Franklin doesn't recognize it off hand, and needs to run some tests on it before he can say what it is. A message comes for Sinclair that Senator Hidoshi wants is on the line for him.

Na'Toth apologizes to G'Kar for embarrassing him, but he says he is proud of her for following the Shon'Kar. Unfortunately, in this case it will have to be delayed, as Jha'dur has something that could potentially be of great benefit to the Narns. Na'Toth agrees to delay it, but not forget it. Sinclair is also given instructions about her. He is to send her to Earth immediately. When he tries to protest, the senator hangs up on him. Meanwhile, the woman wakes up, and seeing Franklin examining the vial lunges up and snatches it away from him, then demands to see the Commander.

Sinclair goes to meet with her, pausing to tell Londo not to listen to rumors of Deathwalker's presence. Londo's question about whether he would be informed if she were in fact on the station is met with a flat, "No!" In Medlab, he dismisses Franklin, to which the woman responds, "You know the way of command. The Wind Swords are right to fear you." She confirms that she is, Jha'dur. She looks as she does because she has developed a drug that prevents all diseases and grants virtual immortality. The implications are staggering, and she claims that, with the proper resources, she can bring it to the entire galaxy in less than a year.

Kosh's meeting seems to be going well, as well as a seemingly nonsensical stream of cryptic phrases and riddles can. Talia is utterly confused, and after concluding this session, asks what it meant. Kosh responds, "You must listen to the music, not the song." Talia then sees images of herself, as though through a series of mirrors.

Sinclair finds Lennier, and tells him the situation. Lennier finds it hard to believe that even the Wind Swords, the most militant of the Warrior Caste would harbor such a villain, but promises to look into it.

G'Kar is talking to Jha'dur, apologizing for the attack and making an offer for her serum. She shows that she knows of him as well, and his accomplishments against the Centauri. He offers to triple Earth's price, which she agrees to consider if he will give her one thing...Na'Toth's head. G'Kar quickly leaves, as Jha'dur cackles in glee.

Sinclair is discussing the situation with his officers. The serum is too complex to develop without Jha'dur's help, and so he has been ordered to send her to Earth. Garibaldi is not happy, but Sinclair says the potential could make all her victims' deaths mean something. It's clear neither of them really believe that, and Garibaldi warns that if word of this gets out, the League will tear the station apart to get her.

G'Kar, meanwhile, has found out about the plan to smuggle Deathwalker off the station. Na'Toth begs to be let loose on her, but G'Kar has another idea. He calls one of the League ambassadors. The security detail escorting Jha'dur is suddenly confronted by the members of the League of Non-Aligned Worlds. Ambassador Kalika, speaking for them, declares that they will only get Deathwalker off the station by killing all of them. They demand a hearing to decide her fate, and Sinclair agrees.

The next day, Talia tells Kosh she doesn't think she can do anymore, but he reminds her they have a contract. As Abbut approaches, she sees herself in some kind of computerized matrix.

The hearing for Jha'dur's fate is about to get under way. Earth will vote in favor of a trial, and Sinclair expects the Minbari to vote in favor as well. The Narn and the Centauri both have had too many dealings with the Dilgar to risk coming out, and since the Vorlons, as usual, have abstained, the deciding vote will be cast by the League, a certain yes.

As the hearing begins, Kalika makes a motion for a trial to be held on Babylon 5. The votes go as expected, except the Minbari. Delenn has instructed Lennier to vote against. Kalika declares the League is not finished yet and storms out. When they are the only two left, Lennier apologizes to Sinclair for allowing Deathwalker to go free. When Sinclair asks, he explains that the Wind Swords did shelter Jha'dur, but the Grey Council only learned of her presence during the Earth-Minbari War. Now, ten years later, they cannot bear the shame of admitting it.

The jumpgate activates and League warships begins arriving. Sinclair orders Ivanova to stall them and goes to talk to Kalika. He his attempts to placate her are rebuffed and he eventually has to tell her about Jha'dur's discovery. Back in C&C, Ivanova is surprised when the league ships suddenly move out of firing range. Sinclair tells her he played a wild card. He then goes back to chambers to finish negotiations.

Talia is back with Kosh and Abbut. She has one more vision, this time she sees herself being attacked. Kosh suddenly declares their business completed. Abbut takes off his hat, revealing a strange cybernetic device from which he takes a data crystal which he gives to Kosh, then walks off. Talia asks what is on it and is told, "Reflection, surprise, terror; for the future." He then leaves.

Sinclair has managed to hammer out a compromise in which Jha'dur will go to Earth to develop the drug, along with a team the League sends, after which she will be turned over to the League's custody. They agree to the terms.

The situation now resolved, Sinclair goes to talk to Deathwalker one more time. She does not believe they will turn her over after the serum is developed, but he says he will make sure personally, a move she thinks will cost him his command. She mocks them for their attitude that they could never do what she and her kind did. She goes on to tell him the main ingredient comes from another sentient being, and cannot be synthesized. Once the news becomes public, it will cause pandemonium as everyone in the galaxy will try to take advantage of it without becoming a victim, a thought she clearly relishes. "Not like us?" she sneers, "You will become us!"

Later her ship has left the station and is approaching the jumpgate when it suddenly activates and a Vorlon ship jumps in, destroying Jha'dur's ship as it passes. Sinclair turns to Kosh and asks why. "You are not ready for immortality." the Vorlon says, then leaves.

Later, Sinclair and Garibaldi are reflecting on the irony of the situation, when Talia comes up and tells them of her strange experience. The memory she's been flashing back to is of a time when she had to enter the mind of a Serial Killer, an experience that disturbed her greatly. Garibaldi tells her Abbut is a Vicar (VCR) capable of recording anything, even brain waves. Sinclair guesses he recorded things she's afraid of for some reason, but no one really knows for sure.