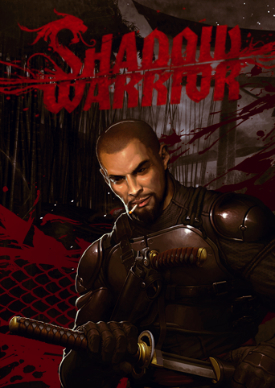 Who wants some more Wang?
"You Got Wang!"
Advertisement:

A reboot to the 1997 video game Shadow Warrior. It follows a younger Lo Wang, an assassin at the employ of corporate mogul Orochi Zilla. Lo Wang is tasked with retrieving an ancient sword called the "Nobitsura Kage". However Lo Wang's assignment proves difficult when a demon invasion happens - the demons themselves also seeking the sword, forcing Lo Wang to team up with the banished demon Hoji (who doesn't remember WHY he was banished) to find the Nobitsura Kage before Zilla, repel the demon invasion, and find out the truth behind Hoji's banishment.

The game was developed by Flying Wild Hog of Hard Reset fame. Greater emphasis was put on sword combat (with the MacGuffin being a Cool Sword), with Lo Wang now capable of doing devastating combos and using Ki Manipulation to great efficiency, on top of his arsenal of guns. The game stays true to the tongue-in-cheek tone of the original, while going for a more developed, complex story.

An expansion to Viscera Cleanup Detail about cleaning up the first level after the events of the game was released 11 Oct, 2013.

Who wants some Tropes?: