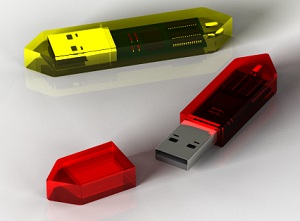 Rather than use magnetic, optical, flash drive or solid-state drive

based information storage mediums, in the future there will be ways to read and write data onto transparent crystaline solids. This jump in technology usually makes each Data Crystal a veritable Bag of Holding for information, uploading and downloading entire planetary databases in seconds. The crystals may be shaped like quartz, techno Crystal Balls or as diamond or gem cut jewelry.

Data Crystals often double as video recorders and Hologram emitters, allowing owners to record, store and project their home movies. Because Power Glows, these Data Crystal hologram projectors can often do so without an external power source.

Truth in Television with the fact that deep inside all of the plastic cladding, all solid-state electronic devices are based on crystalline semiconductors. Also, a three-dimensional storage matrix should work in theory, and once the engineering problems around heat dissipation and signal routing can be solved, offer orders of magnitude greater information density for a given volume than any possible refinement of the essentially two-dimensional storage methods in use today.

Sub-Trope of Power Crystal and Mineral MacGuffin, often used by Higher-Tech Species or residents of Crystal Spires and Togas.