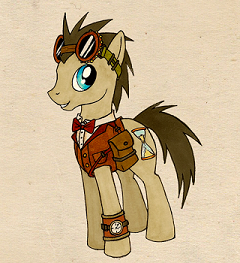 The Doctor in his new duds.
Advertisement:

, both by Squeak Anon.

The Doctor goes on adventures across time and space with the Mane 6 (just not all at once, he can't keep track of six companions simultaneously). As of yet, four regular episodes have been released:

And as the mystery surrounding the cryptic messages left in the Doctor’s path continues to unfold, will the growing schism of distrust between Time Lord and Friendship Scholar over unspoken secrets cost both ponies more than either of them are prepared to lose?