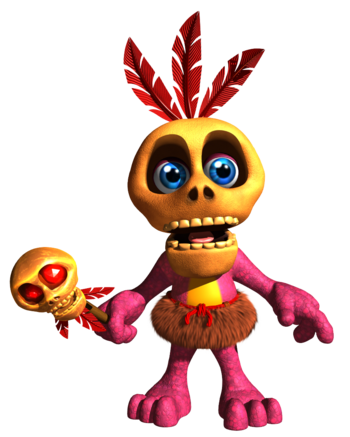 Ting-Tang-Walla-Walla-Bing-Bang
"I can read your future,
I can change it 'round some too.
I'll look deep into your heart and soul... You do got a soul, don't you, Lawrence?
Make your wildest dreams come true!
I got voodoo,
I got hoodoo,
I got things I ain't even tried!
And I got friends on the Other Side..."
— Dr. Facilier, The Princess and the Frog
Advertisement:

A Witch Doctor is a type of sorcerer whose magic style is shamanic rather than arcane, and is often some sort of spiritual leader or teacher. Like many European wizards, he's mysterious and downright creepy even by the standards of his environment. That's why he lives well away from everyone else. His hut is filled with dried and pickled remains of unpleasant and unidentifiable critters. If he doesn't have explicitly magical powers, then he may be a wetware version of the Mad Scientist.

You go to him because he might have a better plan or advice than other rubes, but no one wants to actually talk to him. If he's smart, he knows it and will remind you frequently. Unlike the Mentor, he's concerned with your quest and possibly be a little fond of you, but perhaps not your particular survival. He is usually completely frank and your success is all he really seems to be rooting for.

He may be a pagan Preacher Man whose duty is to minister to a community and lead its religious activity. He may serve as a mediator between humans the natural world or the Spirit World, and maybe his home is distant and secluded so he can stay closer to them. If Religion is Magic, then he wields Functional Magic. As the "doctor" part of his title suggests, he mostly uses his power for healing by working White Magic and brewing Healing Potions. But everyone knows better than to aggravate him, him because he can probably manage Black Magic and Curse just as well.

Even in recent times, most Witch Doctors have a semi-obvious ethnic derivation; the most tolerated currently is Jamaican/Caribbean (normally Haitian) and most will have a Vodoun slant. The Witch Doctor can also be a villainous character, what with voodoo getting the treatment it usually gets in Hollywood. If that's the case, expect his general griminess to be played for creeps rather than laughs. Other times, they may be an example that Dark Is Not Evil. Traditionally, Witch Doctors healed supernatural ailments and broke curses. Doctors for witch problems.

Don't look for a Witch Doctor in the familiar meadows of Arcadia — you will instead find him in an exotic jungle near a tribe of Hollywood Natives. There he will practice spooky Hollywood Voodoo, eager to add yours to his grim collection of Shrunken Heads. In stories (especially older ones) where The Missionary or Gentleman Adventurer is the hero, this figure neatly fits the villain role: a sinister pagan Evil Sorcerer who intends to stop the Mighty Whitey and wants to keep the poor natives trapped in ignorance and superstition. This type of portrayal is mostly a Dead Horse Trope.

Re-interpretations of the Witch Doctor persist, however. Ideas about what a Witch Doctor does are informed by shamanism

, a diverse range of practices among many disparate indigenous peoples. These ideas are still poorly-understood (or misunderstood) by many, but this character may provide a way to explore them, so it remains not an entirely Discredited Trope. Contemporary works can enjoy it while sidestepping most ethnic stereotypes and the Unfortunate Implications attached. In the same way witches have been rehabilitated out of one-note archetypes, a Witch Doctor can be presented in a more interesting way.

This character might still be dark and spooky, but will remind you that Dark Is Not Evil. If they are morally good, they may be Creepy Good. If they fill a Mentor role to another character, they are likely a Trickster Mentor.