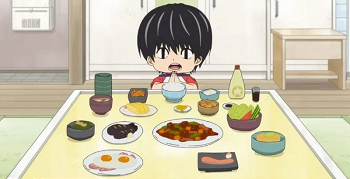 Schoolday's over. Students prepare to leave... but not all of them go to meet friends, hang out with friends, a Love Interest or to a family. For various reasons, some live alone, younger than you'd expect. The most common cause for this trope is that their parents are dead or absent.
Advertisement:

Children that live alone are sometimes rather mature and capable and may even have a job in order to support themselves. If they live with younger siblings, expect them to take on the role of Parental Substitute. Rules of Orphan Economics may apply.

Related to Parental Abandonment. See also Emancipated Child, where the child divorces their parents and goes to live on their own; Department of Child Disservices, where child protection services are crappy in general, including this trope, as well as placing kids with bad foster families; and Social Services Does Not Exist, which is about kids not being taken away from bad families.

Compare Staying with Friends, which is often used when a plot needs to have a character separated from their family but the writers think this trope would be too hard for the audience to swallow. Contrast Basement-Dweller, an adult character who still lives at home with his parents.

Arlo has settled into his new life at SBS, but has a hard time living by himself and tries to make the best of it.

Arlo has settled into his new life at SBS, but has a hard time living by himself and tries to make the best of it.