Film / The Little Girl Who Lives Down the Lane 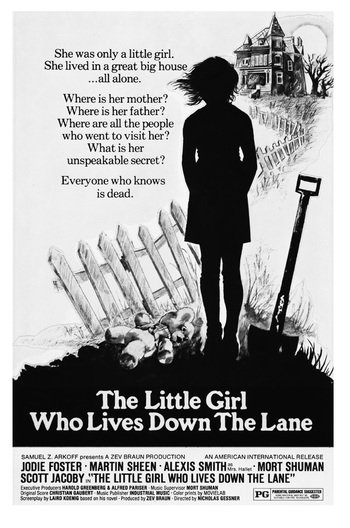 "This is my house!"
Advertisement:

The Little Girl Who Lives Down the Lane is a 1976 French-Canadian thriller film directed by Nicholas Gessner, starring Jodie Foster, Martin Sheen, Alexis Smith, Mort Shuman, and Scott Jacoby. It's adapted from from the 1974 novel of the same name by Laird Koenig, who also wrote the screenplay.

Thirteen-year-old girl Rynn Jacobs (Foster) and her reclusive poet father Lester live in a Big Fancy House overlooking the ocean near the small village of Wells Harbor, Maine. Pretty soon, however, some of the townspeople—like nosy landlady Cora Hallet (Smith) and Cora's pervert son Frank (Sheen)—catch on that something strange is going on. Why is Lester Jacobs always busy when people come to call? Why does he allow his young daughter to speak so rudely to grown-ups and take care of the household bills? Why does Rynn always go into town alone, and why isn't she in school?

But when Cora finally demands some answers from Rynn, she unexpectedly goes missing.

Not long afterward, Rynn befriends Mario (Jacoby), a teenage amateur magician who becomes her Disabled Love Interest. Finally Rynn opens up to Mario about the secret of her reclusive father, her missing mother, and the disappearance of Cora Hallet. Mario offers his help to protect Rynn from Frank Hallet's continued lecherous interest, but when Mario falls ill and leaves Rynn all alone, Frank makes his move.

Rynn's not afraid. She knows how to take care of herself. She's been doing it for a long, long time.

The film was nominated for five Saturn Awards in 1978 and won two of them, Best Horror Film and Best Actress (Foster).