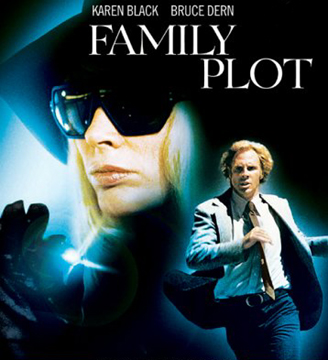 The film starts with a Spooky Séance contacted by Blanche Tyler (Harris). Her latest client is elderly Julia Rainbird (Cathleen Nesbitt), who wants to locate her last living relative: the illegitimate son of her sister, given up for adoption decades ago. Now that boy is supposed to inherit the family fortune, and Julia offers Blanche $10,000 to find her heir. Blanche is actually a Phony Psychic. The facts she reports to her clients are the results of some detective work by her boyfriend, George Lumley (Dern), an unemployed actor and part-time cab driver. The two bumbling detectives now have proper motivation to find that heir.

The scene shifts to the heir Arthur Adamson (Devane) and his girlfriend Fran (Black). They are both Wicked Cultured. Arthur murdered his foster parents many years before and now works as a jeweler and has an upper-class house. He and Fran actually earn most of their money from a highly-successful career as kidnappers, their targets being millionaires and dignitaries. By the time the film starts, the thrill of the work has become part of their motivation. Danger turns them on and really helps their sexual activities. These two are dangerous people.

Naturally, seeking out the two master criminals turns out to be a more dangerous mission than Blanche and George expected.