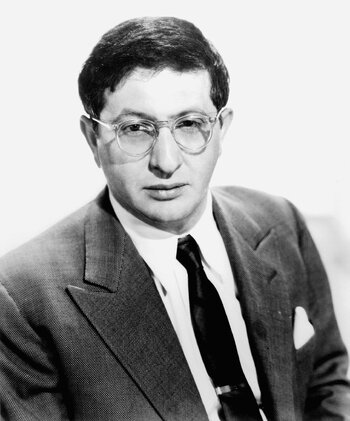 "It was ridiculous; that train was a train of death!"
— Bernard Herrmann, commenting on Richard Rodney Bennett's use of a waltz in Murder on the Orient Express
Advertisement:

Bernard Herrmann (born Max Herman; June 29, 1911 – December 24, 1975) is widely regarded as one of the greatest film composers of all time. Herrmann's music is typified by frequent use of ostinati (short repeating patterns), novel orchestration and, in his film scores, an ability to portray character traits not altogether obvious from other elements of the film. He won an Academy Award for The Devil and Daniel Webster (1941), his second film score.

Born in New York City, the son of Jewish immigrants from what is now Ukraine, Herrmann studied music at the Juilliard School. In 1934, he joined the Columbia Broadcasting System (CBS) as a staff conductor. Whilst at CBS, he met Orson Welles, and wrote scores for Welles's radio show, The Mercury Theatre on the Air, including the famous radio adaptation of H. G. Wells' The War of the Worlds. When Welles moved to movies, Herrmann went with him, writing the scores for Citizen Kane (1941) and The Magnificent Ambersons (1942), although the score for the latter, like the film itself, was heavily edited by the studio.

Unlike most composers, Herrmann took film scoring very seriously and required a commitment different from other genres of classical music. He was also The Perfectionist and he would refuse to score a movie if he didn't have creative control because most directors, in his opinion, didn't know about music and lacked the training. In his career, he cited Welles, William Dieterle, Nicholas Ray as exceptions, as directors who understood music. Herrmann also made it a point to not only write the compositions, but personally orchestrate and conduct his music, which he felt was crucial for him.

Herrmann is most closely associated with the director Alfred Hitchcock. He wrote the scores for every Hitchcock film from The Trouble with Harry (1956) through Marnie (1964), a period which included Vertigo and North By Northwest. He oversaw the sound design in The Birds (1963), although there was no actual music in the film as such, just electronically created bird sounds. Herrmann's most famous music is from another Hitchcock film, Psycho. The screeching violin music heard during the shower scene (a scene which Hitchcock originally suggested have no music at all) is probably one of the most famous moments from all film scores. His score for Vertigo is just as masterly. In many of the key scenes Hitchcock essentially gave the film over to Herrmann, whose melodies, echoing Richard Wagner's "Liebestod" from Tristan und Isolde, dramatically conveys Scotty's obsessive love for the woman he imagines to be Madeleine. However, Herrmann regretted the fact that he didn't orchestrate the score for Vertigo (he felt it was one of his best works): a musician's strike meant that Muir Matheson (a respected conductor) had to do it instead.

Herrmann moved to England, where he began working with younger directors, including François Truffaut, Brian De Palma, Larry Cohen and Martin Scorsese. His work for De Palma was especially appropriate, since De Palma made Sisters and Obsession In the Style of... Hitchcock. He died in his sleep on December 24, 1975, just a few hours after completing recording on his last film score, for Taxi Driver.

Herrmann's non-cinematic works include the four-act opera Wuthering Heights. Herrmann also did some television work; he composed the original theme song for The Twilight Zone (used only during the first season), and also scored individual episodes of that series, The Alfred Hitchcock Hour and Have Gun – Will Travel.

This composer provides examples of the following tropes: