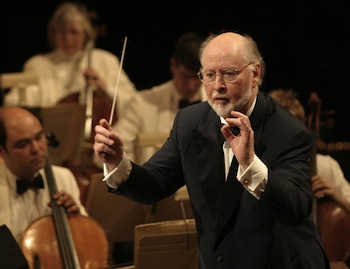 "A lifetime is just simply not long enough for the study of music."
Advertisement:

John Towner Williams (born February 8, 1932) is one of the world's most famous and prolific movie music composers. Professionally active for six decades, he has been nominated for a whopping 52 Academy Awards (winning five), six Emmy nominations (winning three including one for the 1968 Made-for-TV Movie version of Heidi of "Heidi Game" infamy), 22 Golden Globes (winning four) and 59 Grammys (winning twenty). Only Walt Disney has been nominated for more Oscars, and Williams currently holds the record for most nominated living individual.

Born in New York City to a musical family (his father was a jazz drummer), Williams got his start as a session pianist in Los Angeles, performing on film scores by composers such as Jerry Goldsmith (Studs Lonigan; City of Fear), Elmer Bernstein (Sweet Smell of Success; God's Little Acre; Staccato; The Magnificent Seven; To Kill a Mockingbird), Henry Mancini (he actually played the well-recognized opening riff to the Peter Gunn theme; Mr. Lucky; Days of Wine and Roses; Charade), Alfred Newman (South Pacific), and Jerome Moross (The Big Country).

Williams' scores are known for their liberal use of Leitmotif — practically every major character and concept has its own musical motif woven into the score. Williams is also fond of the Fanfare. Despite these stylistic preferences, he seems to be willing to experiment with every movie, adding different instruments and techniques with each new film. (For example, one piece

of the Attack of the Clones score uses an electric guitar.) When a Williams composition is playing, you will generally be in for a good movie. If the movie's not good, well, the music certainly will be.

Unless you're hearing impaired or haven't seen a movie in the last 30 years (or maybe not even then), you'll have certainly heard one of Williams' tunes. Most of his themes have become iconic in their own right, such as the opening fanfare of Star Wars, the famous string sting from Jaws or the theme for Indiana Jones. Williams has long been the go-to composer for Steven Spielberg's films (he even wrote the music for the Amblin and Dreamworks logos). Likewise, his music for Superman: The Movie gave the Superhero film genre a rarely equaled feel of heroic majesty.

Interestingly, many connoisseurs of Classical Music actually hold Williams in rather low regard, as many elements of his compositions (including some of his most well-known themes and motifs) are borrowed from older pieces of music. Though even they admit he's less guilty of this than others. For most listeners this is one of his strengths; in the words of the founding editor of Film Score Monthly Lukas Kendall (whose all-time favorite score is The Empire Strikes Back): "His themes sound inevitable. They sound like they fell out of his sleeves; they sound like they've always existed. And it's extraordinary how you get just two notes for Jaws or five notes for Close Encounters of the Third Kind and have them feel like they've always existed."

In addition to his film scores, Williams has composed music for four Olympic Games, The Mission suite for the NBC Nightly News (Also used by Seven News in Australia) and the inauguration of President Barack Obama, among many others. He also conducted the Boston Pops Orchestra from 1980–93 and remains Director Laureate to this day.

Early in his career, Williams worked for producer Irwin Allen (under the name "Johnny Williams"), providing the themes (and pilot scores) for the television series Lost in Space, The Time Tunnel and Land of the Giants and scoring such disaster films as The Poseidon Adventure and The Towering Inferno. Williams himself credits much of his success to the collegial relationships he developed with his fellow musicians during his own stint in a studio orchestra. He also scored the pilot for Gilligan's Island (but he didn't write the theme song).

the British character actor, or any of the dozens of other eminent historical John Williamses

. He is, however, related to Joseph Williams, the singer from Toto and Simba's singing voice in The Lion King (1994)— that would be his son.

He is also the man

. The podcast The Baton: A John Williams Journey is thoroughly recommended.

John Williams and the London Symphony Orchestra, everybody!

John Williams and the London Symphony Orchestra, everybody!