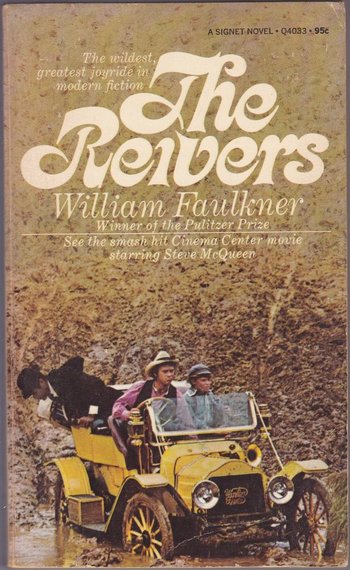 The Reivers is a 1962 novel by William Faulkner.

Lucius Priest is an 11-year-old boy, son of a well-to-do family in Yoknapatawpha County, Mississippi, in the first decade of the 20th century. His grandfather is rich enough to buy an automobile, one of the first ever seen in the county. The automobile becomes crucial to the plot when protagonist Boon Hoggenbeck, employed by the Priests as a stablehand, steals it while most of the Priest family is away following the death of Lucius's grandfather. Boon's goal is to drive the car from Jefferson to Memphis to see one Miss Corrie, a prostitute whom Boon occasionally patronizes. Boon hopes to get Corrie to marry him.

Boon enlists Lucius to help him steal Grandfather Priest's car and go off on the joyride to Memphis. They are surprised to find that Ned McCaslin, a black man and another employee of the Priests, has stowed away in the back of the car. A madcap adventure ensues.

William Faulkner's last novel, published just a month before his July 1962 death. Drolly humorous in tone, recalling Mark Twain and The Adventures of Huckleberry Finn more than the dark, heavy Southern Gothic dramas that formed most of William Faulkner's work.

Winner of the 1963 Pulitzer Prize for Fiction. In 1969 it was adapted into a film directed by Mark Rydell and starring Steve McQueen as Boon.