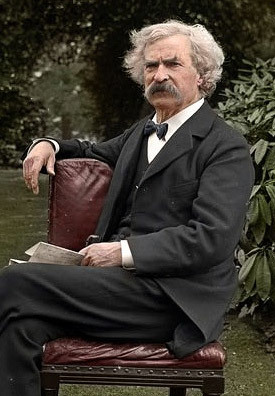 Just look at that glorious mustache.
"The human race is a race of cowards; and I am not only marching in that procession but carrying a banner."
Advertisement:

Boston, Massachusetts, November 1869. A short, thin man wearing a cheap suit, an unkempt mop of red hair, a long red mustache, and brandishing a smelly cigar, ambles up the staircase at 124 Tremont Street to the second story headquarters of Ticknor & Fields, a publishing firm. Settling into the office of William Dean Howells, a junior partner of the firm, he lets fly a ravishing quip, referencing a favorable review of his latest work, The Innocents Abroad, in a magazine published by the firm. "When I read that review of yours, I felt like the woman who was so glad her baby had come white".

And thus Samuel Langhorne Clemens (November 30, 1835 – April 21, 1910), now one of the most quotable men in history, erupted onto the literary scene. He was a backwoods outcast of low social standing who became a seminal American author, and he is considered to be the father of American literature. He took his most prominent Pen Name from 19th century riverboat jargon. The boatmen would call out "marks" indicating the depth of the water. "Mark Twain" indicates two fathoms, which is just deep enough for maneuvering. The name is deliberately ambiguous, for mark twain is the point at which dangerous waters become safe — and safe waters become dangerous. (Clemens himself loved being a steamboat pilot, and rejoiced when he received his riverboat license in 1859. He called the river a book where "there was never a page that was void of interest, never one that you could leave unread without loss, never one that you would want to skip, thinking you could find higher enjoyment in some other thing.")

The son of Missouri slave owners (though an abolitionist himself), he dropped out of school at age twelve and spent his formative years working as a printer's apprentice, before becoming a riverboat pilot on the Mississippi and later a newspaper reporter in the Nevada Territory. His early fame was as a humorist and satirical newspaper writer, before he broke into the American literary landscape as an author and essayist. His "speaking engagements" were essentially what would be called "standup comedy" these days; one young man during one of his performances said that if Twain got any funnier, he would Die Laughing. He was so skilled at Deadpan Comedy and at working a crowd, that at the start of one performance he said absolutely nothing for a few minutes, just looking knowingly at the audience, and the crowd was eventually roaring in laughter.

His early years as a writer was out West, especially in Carson City and San Francisco. It was during his period in San Francisco where he met some of the more colorful personalities that would find their way into his stories, especially Emperor Norton (who showed up as the King in Huckleberry Finn.)note Twain later regretted upon hearing Norton's death in 1880 that he never got a chance to work on a biography for the Emperor of the United States.

He was also obsessed with the separation between the "dream self" and the "waking self", and kept a regular dream journal twenty years before Freud. He was also horribly guilt-ridden over the deaths of family members he blamed himself for, such as his younger brothers Benjamin and Henry and his son Langdon. In fact, all of the tragedies that occurred in his life he blamed himself for, no matter how circumstantial or accidental. He eventually became a Nay-Theist; when a woman told him "God must love you", he told a friend after she left, "I guess she hadn't heard of our strained relationship."

Twain was also a walking contradiction, and prided himself on it. He was from a slave state and (briefly) joined the Confederate Army, but was an abolitionist. He was anti-imperialism and crusaded for the poor, but himself was into Get Rich Quick Schemes, obsessed with being rich, and befriended the very capitalists he derided, such as Andrew Carnegie. (When told by a friend, "Old Carnegie's money is all tainted!", he replied, "Yes, it is. 'Taint yours and 'taint mine.") He was also best-buddies with Nikola Tesla and befriended a young half-American Boer War veteran named Winston Leonard Spencer Churchill during a lecture tour.

Twain was one of the pioneers of the Science Fiction genre, a detail easily missed with his major literary accolades. A Connecticut Yankee in King Arthur's Court is his best known science fiction work, but he also did short stories, one of which anticipated YouTube of all things.note He described a device which would let anyone see a variety of videos of events from around the world and comment on them... in 1895!

His early works were humorous (and Clemens in his Twain persona is one of the most famous Deadpan Snarkers there is), but he became a bit of a Straw Nihilist later in life when his favorite daughter, Susan, caught meningitis, went mad and died at 24note in her delirium she composed an amazing 47-page prose poem, partly addressed to the long-dead opera singer Maria Malibran, whom vocal student Susan considered kind of a role model his wife died of heart failure, and his middle daughter Jean drowned in the bathtub on Christmas morning after suffering an epileptic seizure. And let's not forget losing most of his fortune to business investments that went bad, forcing him to declare bankruptcy. Despite it all, Twain always seemed to come back from tragedy, becoming more and more of a hero to people who viewed him as a survivor. In addition, Twain dealt with the deaths of his daughters by what he called "collecting" girls age 10 through 16, whom he called "Angel Fish", to be their unofficial grandfather, taking them to concerts, the theatre, and to his own house for card games, billiards, and reading. (His surviving daughter Clara did not approve, and was more than a little jealous of the attention he gave them. The letters between Clemens and the girls can be found in the book Mark Twain’s Aquarium: The Samuel Clemens-Angelfish Correspondence

.) Despite what you may be thinking, there is no evidence these relationships were in any way inappropriate, and it was Clemens's way of dealing with the grief of tragically losing his own daughters.

He died on April 21, 1910, the day after Halley's Comet reached its perihelion, or closest pass to the sun. He was born two weeks after its prior perihelion in 1835. As Clemens himself said the year before he died, "The Almighty has said, no doubt: 'Now here are these two unaccountable freaks; they came in together, they must go out together.'" He had no recorded last words, as he was too exhausted to speak. Instead, he wrote on a piece of paper, "Give me my glasses." He was given them, but never wore them, instead putting them down and slipping into unconsciousness.

Works by Clemens with their own pages:

A True Story, Repeated Word for Word As I Heard It

given to the Stomach Club in Paris.

Personal Recollections of Joan of Arc (1896)

The Man That Corrupted Hadleyburg (1900)

To the Person Sitting in Darkness (1901)