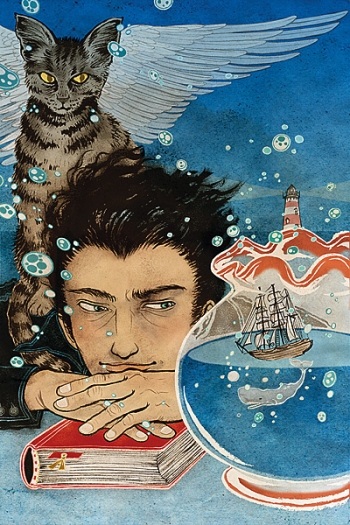 Tom: It's— It's a story. It's just a story, man. It's not worth dying for.
Ambrosio: Just a story? Tell that to the Greeks who fought at Troy, Tommy. Tell the women burned as witches. The Rosenbergs. Sacco and Vanzetti. Tell the Martyrs of all the religions and the millions who fell in all the wars since time began! Stories are the only thing worth dying for!
Advertisement:

The Unwritten is a Vertigo Comics series by Mike Carey and Peter Gross, whom you might know as the principal creative team behind Lucifer. The series started in July 2009 and tells the story of Tom Taylor, son of an ultra-successful fantasy novelist who disappeared mysteriously at the height of his career. The protagonist of his father's Tommy Taylor series was obviously based on him, causing Tom no small amount of resentment. He is the constant center of attention for fans who want to meet "the real Tommy Taylor". At the same time, he isn't above cashing in by appearing at book shows and signings.

However, his life is turned upside down when it turns out that records of Tom's life are incomplete, and that he might be adopted, or just a fraud. Public outrage is instantly sparked, but things get even weirder when some of the more obsessive fans start believing he's Tommy Taylor made manifest. Soon afterward, he's attacked by what seems to be the vampiric Big Bad of the Tommy Taylor novels, Count Ambrosio. He's only barely rescued by Lizzie Hexam, the same woman who sprung the secret of his origin to the public, and who has some kind of connection to his missing father. The boundary between reality and fiction starts to blur as Tom sets out to discover the truth, while also being hunted by someone himself.

The Unwritten provides examples of: