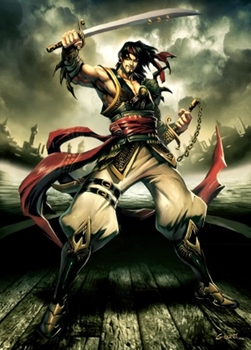 Who's the most phenomenal, extraordinary fellow?
Advertisement:

Sinbad the Sailor is an outcome report about an Intrepid Merchant who goes on seven high risk business ventures to open new trade routes to oversea markets, only to have unforeseen complications create areas of opportunity for his negotiating skills to create mutually beneficial outcomes.

Or at least, that would be the modern interpretation of Sinbad. This Middle Eastern fable is a collection of stories told in a manner similar to the Thousand And One Nights; Sinbad (or Hinbad) the Porter stops to rest outside the mansion of Sinbad the merchant, and laments that for chance he missed out on the amazing riches of the latter, which he won very easily. However, who should hear him but Sinbad the Sailor? Rather than be angry at his jealousy, he invites the porter to dine with him and regales him for seven consecutive nights with the tales of his fortunes and misfortunes, adventures and perils, giving him a hundred gold coins at the end of each.

The tales of Sinbad the Sailor were originally independent of the Thousand and One Nights. Antoine Galland added Sinbad to the Nights when compiling his 18th-century French translation, which was the first translation into any European language, and which introduced the Nights to European culture. The "Sinbad" stories have since become closely associated with the Thousand and One Nights and are usually included in Nights translations. The original Arabic name is most closely transliterated as "Sindbad"; this is how it's spelled in the famous Richard Burton translation and the 2008 Lyons translation. Note that there are two radically different versions of Sinbad's seventh voyage (one where he spends a long period in a city of intermittently winged men, the other where he's enslaved and encounters an Elephant Graveyard); some translations include both.

Despite being commonly called "the Sailor," Sinbad is a merchant and a ship-owner, and has adventures in places reached by sailing, but is not himself a sailor of any sort; at most, he occasionally improvises rafts for emergency travel. Some translations call him something like "Sindbad of the Sea", which might be more accurate.

Sinbad has proven a popular figure in the cinema and on TV, where, however, his adventures have generally had little connection with his original 1,001 Nights version.

Tropes used in the Seven Voyages:

Tropes used in the First Voyage:

Tropes used in the Second Voyage:

Tropes used in the Third Voyage:

Tropes used in the Fourth Voyage:

Tropes used in the Fifth Voyage:

Tropes used in the Sixth Voyage:

Tropes used in the Seventh Voyage:

Works Featuring Sinbad (Sometimes In Name Only) Include: