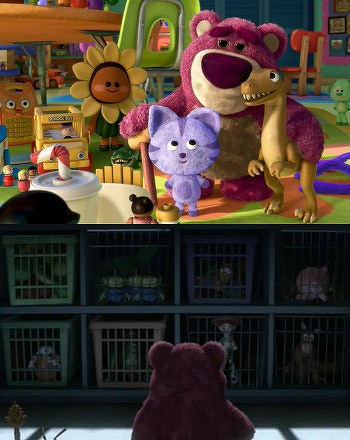 At Sunnyside, Lotso will make sure you stay forever.
"You can see your breath hanging in the air.
You see homeless people, but you just don't care.
It's a sea of smiles in which we'd be glad to drown."
— Stan Marsh singing about his home town

A setting which, at first sight, looks nice and cute. The world is full of cheery colors, people are smiling, happy and helpful, and you're probably thinking you've just stepped into a Sugar Bowl. Suddenly, you notice something wrong, and upon investigating, you realize that every single thing below the surface is horribly wrong and dysfunctional. Maybe the society is Powered by a Forsaken Child. Maybe the cheeriness is maintained by totalitarian rulers that dole out horrible punishments for the slightest infractions. Maybe the bright and shiny part isn't the only part, and the more traditional Crapsack World is kept hidden from the public eye. Maybe people who ask too many questions or don't meet the standards the society pushes for suffer unfortunate accidents, or disappear, or are labled as criminals. Maybe it's just a manufactured atmosphere, full of nice-looking but fake towns and cities, or even a manufactured reality. Basically, this is a Stepford Smiler on the scale of an entire setting, where behind the bright, cheery and colorful appearance, it's really a Crapsack World.

Compare with False Utopia, when one of the main points of the story is the contrast of how perfect the world looks and how imperfect it truly is, Gilded Cage, Peace & Love Incorporated, Light Is Not Good, Stepford Suburbia, Techno Dystopia, and Town with a Dark Secret. Often involves Fridge Horror, Sugar Apocalypse, Grotesque Cute, Dangerously Garish Environment, and Glurge as well as Sunshine Noir. A Type B cynical portrayal of The Promised Land that isn't a used-up and barren wasteland is likely to be one of these.

If the seemingly perfect world is a full-on illusion, created to entrap or otherwise fool someone, then it is a Lotus-Eater Machine.

See also City in a Bottle, where Crystal Spires and Togas meets Government Conspiracy, Soiled City on a Hill, which can be a former Shining City that retains its shiny exterior even though its heart has become corrupt and rotten, and Vice City, a city whose have already been overrun by criminals and other serious issues under its face value of being a Shining City. Urban Segregation can result in this if the viewer is initially shown only the utopian parts of the setting. A child-oriented Adventure-Friendly World or a City of Adventure is prone to being this, so does Graffiti Town.

Contrast with Sugar Bowl, the (usually) non-ironic version of this trope. Compare and contrast Vile Villain, Saccharine Show and the similar Uncanny Village wherein a world becomes a perfectly ordinary Sugar Bowl if its horrifying villain were removed, whereas a Crapsaccharine World is fundamentally rotten to the core. The two can overlap, however, if the villain is bad enough to make their world look good in comparison. Contrast People's Republic of Tyranny, Fauxtivational Poster, A World Half Full, where it looks like a Crapsack World, but it can get better, and Heel–Face Town, where the town (or city) is a Shining City which was reconstructed from a Crapsaccharine World. Happiness Is Mandatory can be this, but often fails to create even a pleasant veneer over things.

Note that this trope is about a setting. If the art style clashes with the mood of the work, that is Art-Style Dissonance instead.

As this trope involves the revealing of a world's true nature, expect spoilers ahead.

open/close all folders
Art
Asian Animation
Comic Books
Comic Strips
Fan Works
Fan Works — My Little Pony: Friendship Is Magic
My Little Pony: Friendship Is Magic fan works seem particularly prone to this, possibly because the world is shown to be a Sugar Bowl but is also full of dangerous mythological monsters. Everything from Celestia being depicted as an oppressive tyrant to Pinkie Pie having some rather unpalatable hobbies turn up regularly.