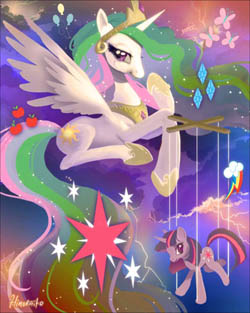 Twilight's got at least 99 problems. And they're all because of Celestia.
"I will not willingly take part in this plan of yours, Princess. I will do my best to resist you, body, mind, and soul. You've clearly gotten to my friends, and I hate you for that just as much as I hate you for what you have done to me."
—Twilight Sparkle
Advertisement:

is an Alternate Universe fan fiction of My Little Pony: Friendship is Magic. It is part one of the Sunfall Universe, a series of stories written by Airstream,

where the magical land of Equestria is not all Twilight thought it seemed to be.

Years after her heroing days seem passed, her country is at peace, and her friends have begun to settle down. Twilight however, is soon caught in a series of events leading to a horrifying revelation that will shake the core of nearly all her beliefs. Friends will become enemies, and lives will hang in the balance, including her own in this cosmic chess game.

For Twilight, there is little choice, she can fight for her Freedom, or die for Celestia's Harmony.

But nothing's guaranteed in the Sunfall Universe.

Current works in the series: