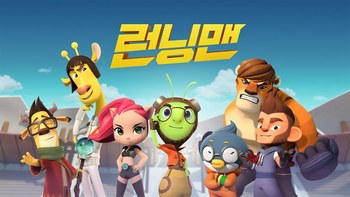 Are you ready? It's...running time!

The Soul Tree, the great source of our race.
But for its ultimate power and by those whose minds were blinded by it,
it also became the catastrophic cause that had brought never-ending wars between the tribes.
Tortured by the agonies of the wars,
the leaders of the tribes finally came to a peace agreement that they would instead open a competition.
Players, equipped with special watches and shields,
compete against each other as winner’s tribe would be awarded with Materion,
the sacred fruit of the Soul Tree.
These brave players, who throw themselves in this fierce fight,
we call them the Running Man.
— Running Man WORLD VIEW

(런닝맨) is the animated version of the Korean variety show with the same name, set inside a kingdom of animals. The main plot is about the 100th Annual Running Man Championship, a series of team or individual competitions, led by Charming Gold. Seven animals from each tribe represent their tribe in the competitions. Those animals are Liu the Grasshopper, Kuga the Tiger, Gai the Ninja Monkey, Lonky the Girrafe Prince, Popo the Penguin, Pala the Impala and Miyo the Cat.

The English dub of the show is released on Cartoon Network Asia at 10:15 am and new episodes are aired at 6:45 pm with two episodes each on weekdays. Repeats of episodes are shown at 6:30 pm on weekends.

Online episodes are published every Friday on the Korean YouTube channel.

Warning: There will be massive spoilers for the people who watched the Cartoon Network Asia

version of the show.

Tropes appearing in the show include: