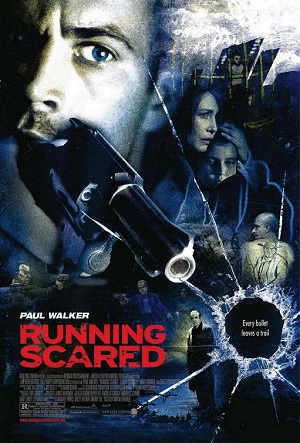 Judging by the poster, you would guess that it's a generic crime thriller, right? Hell NO.
"Speaking of movies that go over the top, Running Scared goes so far over the top, it circumnavigates the top and doubles back on itself; it's the Mobius Strip of over-the-topness. I am in awe. It throws in everything but the kitchen sink. Then it throws in the kitchen sink, too, and the combo washer-dryer in the laundry room, while the hero and his wife are having sex on top of it."
— Roger Ebert
Advertisement:

A 2006 crime film starring Paul Walker, Cameron Bright, and Vera Farmiga. It was written and directed by Wayne Kramer (The Cooler, Crossing Over).

The plot follows a two plotlines: In the first, Oleg (Cameron Bright), the adolescent son of a mid-level Russian mobster, steals a gun from his neighbor's house in an effort to get back at his abusive father, only to take off running into the city. Over the course of the night, he encounters a string of strange characters, some helpful and some malevolent, giving his perilous adventure the air of an updated fairy tale.

In the second, Joey Gazelle (Paul Walker), a mid-level mafioso, is tasked with disposing of several guns used by mobsters to kill Dirty Cops, but Oleg, his neighbor, steals one before he can do anything with them. Joey is forced to track Oleg's journey through the city in an effort to recover the gun before the cops, the Russian mob or the mafia can get them.

In spite of being a Box Office Bomb, the film is notable for its style and Refuge in Audacity.

Not to be confused with the buddy cop film,Running Scared (1986), starring Billy Crystal and Gregory Hines.