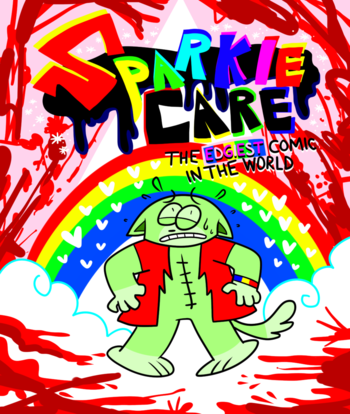 The edgiest comic in the world.
"Oh my god. I feel like I've died and have been put in a bad fanfic with too many characters and no sense of plot."
— Barry
Advertisement:

Sparklecare is a very bright webcomic created by a cartoonist named Trip that started in August 2016. It follows the adventures of a cat named Barry Ill as he traverses the magical, vividly colored (and apparently illegal) Sparklecare Hospital, run by the utterly bonkers Dr. Doom and his second-in command apparent surgeon Dr. Cuddles. Don't let the Diabetes-esque color scheme fool you, though. This series is dark. Really dark. Like, vomiting fetuses and implied necrophilia dark. Just saying!

The comic began its second chapter in May 2017, and it's still ongoing. It updates every Monday with four new pages a month.

On her YouTube channel, Lps666, Trip started a series of spinoff videos called "barrys notes", in which Barry writes down descriptions of each doctor.

It's worth noting that Trip is aware of this page

, and she was very happy to see it!

The comic was originally hosted here

on Tumblr, but in January 2017, it was moved to its own website