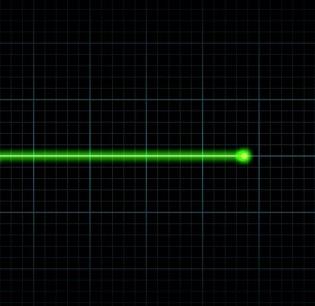 An injured or sickly character will go into the hospital, and while there will be hooked up to a machine that goes PING! As long as the electrocardiogram machine is beeping, and as long as the line on the screen that indicates the character's heart is still beating is going up and down like a metronome, everything's fine. But then suddenly, the beeping becomes erratic and the lines on the screen will start jumping up and down until finally, the lines flatten out and the machine lets out one long sustained beep! The medical personnel scramble about, someone in the background is calling a Code Blue over the intercom, and inevitably a defibrillator will be wheeled in. Sometimes, the character will be revived and the beeping and regular jagged lines on the machine's screen restart.

The technical term for a "flatline" is asystole ("a-" for lacking, "systole" for the contraction cycle of a heartbeat). This event is not always the result of the character having a heart condition; asystole can be caused by lots of things, including profound hypoxia (lack of oxygen in the blood), poisonings and intoxications, and consequences of trauma (i.e. massive hemorrhage, tension pneumothorax - leaking air from a collapsed lung putting pressure on the heart, or cardiac tamponade - blood building up around the heart and squeezing it to death). However, the circumstances leading to asystole are always catastrophic in nature, such that even if you manage to re-establish a rhythm (itself usually a losing proposition), the patient's chances of actual recovery are abysmal (but not always zero; a patient recovering from cardiac arrest is known as Lazarus syndrome).

Regardless of what they were hospitalized for, thanks to The Law of Conservation of Detail, if a character is hooked up to a cardiac monitor, they will almost always flatline at some point. You definitely won't hear them if the character isn't going to die, because that beeping sound is just annoying. Additionally, it will either be an instant thing from a regular heartbeat to a line, or a very sudden series of erratic bleeps suggesting the patient is having a heart-attack, often from stress, just before the flatline itself. If the scene is being played for comedy, the "flatline" may be the result of the patient playing with the monitor leads, getting up for a bathroom trip, a guest accidentally tripping over the monitor, or other such mundane causes.

For a heartwarming spin on the trope (no pun intended), an unexpected flatline may be the result of a patient having suddenly recovered, then unplugging the machine to announce their survival to the world!

Rule of Perception says that a flatline on film is always... well, a flat line. In Real Life there might be a drifting baseline, but this is not true electrical activity. The flatline may also wave in time with the 50Hz or 60Hz of mains power, especially if a mains filter is not used or is faulty. There is also a condition called PEA (Pulseless Electrical Activity), distinct from asystole, where there is an organized rhythm on the monitor, but no pulse. The eletrical activity is present, but the heart muscle is not responding. Both PEA and asystole are unshockable rhythms (the defibrillator will do absolutely nothing) and must be treated with continued CPR, epinephrine ASAP and then every 3-5 minutes, and attempting to reverse the causes of the rhythms—most commonly, hypovolemia and hypoxia.

For the Doctor Who episode, go here.