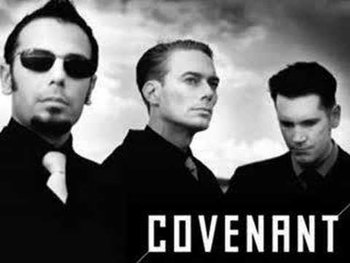 We find our songs in fashion magazines,
We read the story in the morning paper,
I touch their hearts, and they touch my skin,
I'm on your screen and you are just so wide.
"Dead Stars"
Advertisement:

Covenant is a Swedish Futurepop / EBM group with three members, albeit not always the same ones. The original line-up consisted of Eskil Simonsson, Joakim Montelius, and Clas Nachmanson. Nachmanson has since left the band, and has been replaced by Daniel Myer, of Haujobb / Destroid / Architect Reknown, among many others.

Not related to Norwegian metal band The Kovenant.