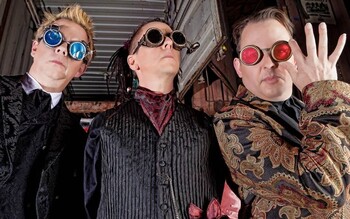 Information Society (a.k.a. InSoc) is an Alternative Dance/Synthpop/Dark Wave/Techno/Industrial/Latin Freestyle/Futurepop band from Minnesota. Best remembered for their incredibly '80s hit, "What's On Your Mind (Pure Energy)", and for "Ozar Midrashim", the theme of Legacy of Kain: Soul Reaver, a series frontman Kurt Harland would compose.