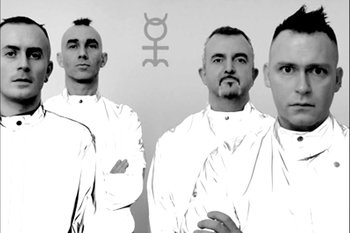 "COIL know how to destroy Angels. How to paralyse. Imagine the world in a bottle. We take the bottle, smash it, and open your throat with it. I warn you we are Murderous. We massacre the logical revolts. We know everything! We know one thing only. Absolute existence, absolute motion, absolute direction, absolute Truth. NOW, HERE, US."
The Coil Manifesto, "The Price Of Existence Is Eternal Warfare"
Advertisement:

Formed in 1982, and disbanded in 2004, following Balance's untimely death. Masters of the industrial genre, Coil went on to define (and re-define) several aspects of the genre over their career. Christopherson was involved in creating one of the first samplers, which ended up being used extensively on their 1991 album Love's Secret Domain. Coil came to mainstream prominence through their remixes of Nine Inch Nails songs in the mid-'90s. Their debut single "How to Destroy Angels" later became the title of NIN frontman Trent Reznor's second band (which Christopherson approved the use of.) Coil's influence is felt across the world of electronic and experimental music, from Autechre to Sonic Youth.

Not to be confused to those other bands who use the word "Coil" in the band names (and there are a lot of them).

Tropes present in this band's works: