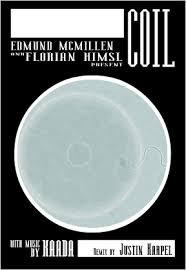 is an experimental game found on newgrounds.com made by Edmund McMillen And Florian Himsl (The Binding of Isaac guys) with a minimalist approach to gameplay. Players progress by controlling the mouse to accomplish certain goals which they must figure out as they move from level to level. It isn't very long or difficult so why not give it a try if you have some free time?

Tropes that apply to Coil include: