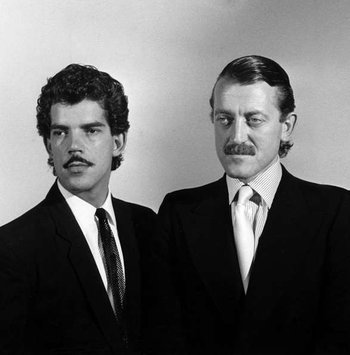 Yello is a Swiss avant garde Electronic Music duo comprised of Dieter Meier and Boris Blank. Their music is characterized by its heavy reliance on unusual samples backed by catchy rhythms and Meier's Badass Baritone.

The duo are best known for 1985 single "Oh Yeah" thanks to its appearance in the films Ferris Bueller's Day Off and The Secret of My Success (as well as countless movies and shows paying homage to both), as well as their 1988 song "The Race," which was used as the theme for Euro Racing throughout The '90s.