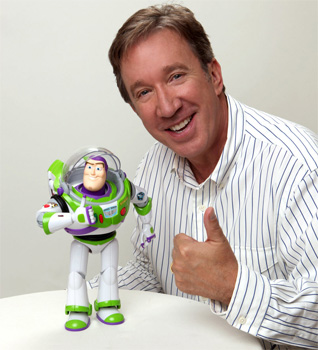 "To infinity, and beyond!"
"Oh no, I killed Wilson! Looks like it's back to jail for me! (grunting noises)"
— "Tim Taylor" on The Simpsons, "Deep Space Homer"
Advertisement:

Timothy Alan Dick (born June 13, 1953), known professionally as Tim Allen, is an American comedian, actor, voice-over artist and entertainer born in Denver, Colorado. He's known for his role in the sitcoms Home Improvement and Last Man Standing. He is known for his starring roles in several popular films, including the Toy Story franchise (as the voice of Buzz Lightyear), The Santa Clause film series, and Galaxy Quest. Allen also wrote an autobiography, Don't Stand Too Close to a Naked Man, and has been the voice of "Pure Michigan" tourism ads since 2006.

More on his career can be found, as ever, on The Other Wiki.