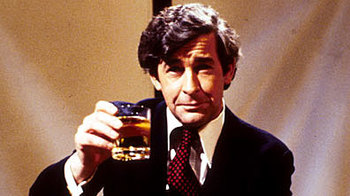 Dave Allen (born David O'Mahoney) was an Irish comedian whose trademark style consisted of him sitting on a bar stool, occasionally sipping from a glass of whiskey, and ruminating on matters ranging from the hypocrisies of organised religion to the generation gap. He is best remembered in Britain for his long running series, Dave Allen at Large, which mixed his stand up routine with handsomely mounted filmed sketches (often involving priests or, for some reason, Mexican bandits). Allen has been incredibly influential on the British comedy scene and his style of “Sketches linked by stand-up” has been adopted and adapted by comedians ranging from Jasper Carrott to Stewart Lee. He died in March 2005.