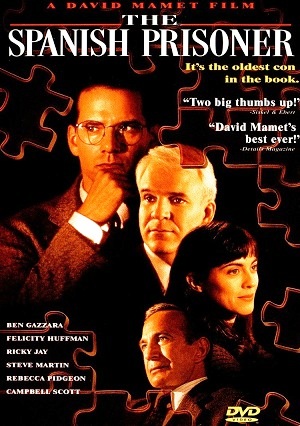 The Spanish Prisoner is a suspense/crime/mystery film written and directed by David Mamet. It revolves around Joe Ross, a researcher for an unnamed major company who's recently perfected an unspecified process which is worth a great deal of money. While on a business trip in the Caribbean, he meets and befriends a wealthy traveler who offers to advise him and help him get a fair share of the profits. Shortly, however, he begins to question his new friend's motives and intentions. As in most Mamet stories, deceptions and cons pile up as both the protagonist and the audience try to figure out who's telling the truth, and who's part of a plot.