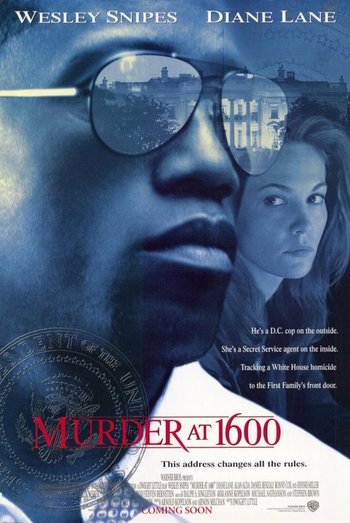 Murder at 1600 is a 1997 American thriller film starring Wesley Snipes and Diane Lane. The film is based on Murder in the White House by Margaret Truman, daughter of U.S. President Harry S. Truman.

In a restroom in The White House, a janitor finds White House secretary Carla Town dead. Metropolitan Police homicide Detective Harlan Regis (Snipes) is put on the case. At the White House, Regis is introduced to Secret Service agent Nina Chance (Lane), who's assigned to keep an eye on Regis.

Parallel to this, the White House has to deal with an impending international crisis: U.S. President Jack Neil (Ronny Cox) has been trying to deal with a situation where Americans are being held hostage in North Korea, and some people—including several members of his inner circle, led by Vice President Gordon Dylan—think the President is not handling it the right way. When the first suspect, the White House janitor, is dismissed as the evidence against him is found to be set up, Regis begins to suspect that a conspiracy may be involved.

Murder at 1600 provides examples of: