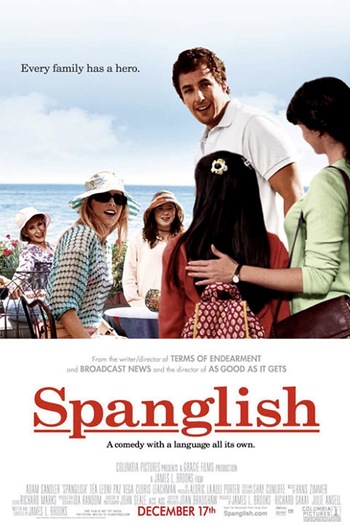 Flor Moreno (Paz Vega) is a recent illegal Mexican immigrant who, with her daughter Cristina (Shelbie Brucenote at 12 years old; Aimee Garcia as the narrator/Adult Cristina; Victoria Luna as 6-year-old Cristina), hopes to start over and make a new life in America. After staying in the Los Angeles barrio with family, Flor finds work as a housekeeper for the affluent Clasky family. John Clasky (Adam Sandler) is a head chef at a popular restaurant, while Deborah (Téa Leoni) is a stay-at-home mother with somewhat neurotic tendencies. They have two kids, Bernice (Sarah Steele), who's self-conscious about her weight, and Georgie (Ian Highland), who is informally taking singing lessons with his grandmother Evelyn Wright (Cloris Leachman), an alcoholic former jazz singer.

This results in a variety of clashes between the different factions in the house, providing the main conflict driving the film.

Flor attempts to remain isolated from the Claskys, wanting to hold on to her cultural identity for the sake of herself and her daughter, but things aren't always that simple...