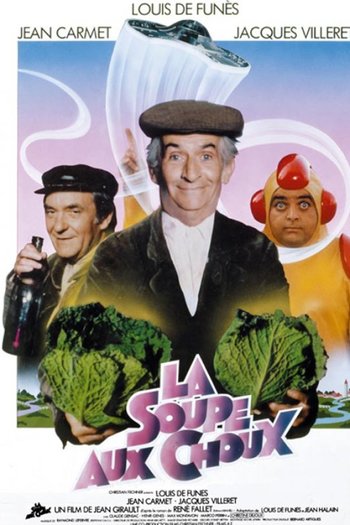 A good comedian can make us laugh but a great actor can also makes us cry.
"Come on, a lil' canon!"note  "Canon" is a term for a small glass of alcohol and in this context, wine.
— Le Glaude

La Soupe aux choux (The Cabbage Soup) is a 1981 French science fiction comedy film starring Louis de Funès, Jean Carmet and Jacques Villeret. It is the adaptation of a 1980 novel by René Fallet.

Claude Ratinier ("Le Glaude", De Funès) and Francis Chérasse ("Le Bombé", Carmet) are two old peasants (a shoemaker and well-digger respectively) who live in a small French village. One night, a farting contest between them attracts an alien.