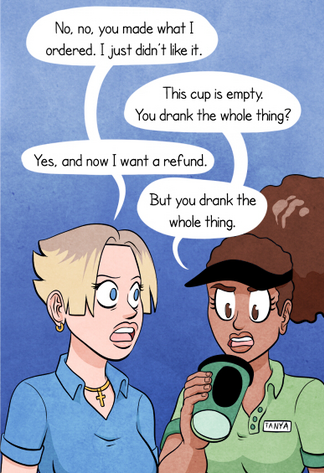 "You should know, no matter where you are or what you're doing, I will always fight for you in an embarrassing and inappropriate way."
— Beverly Goldberg, The Goldbergs
Advertisement:

This type of woman is an Alpha Bitch in adulthood: usually white and heterosexual, somewhere in the middle class, and feeling entitled to have the entire world suit her needs and preferences. And if Everyone Went to School Together, she was probably like this during her formative years as well. She likes to be heavily involved in local politics, such as the PTA, the homeowners' association, or the neighborhood watch; in general, she likes rules, structures, and hierarchies, and will frequently invoke their authority whenever she feels it will support her position. She is very likely to identify herself as a Christian and is often involved in her local church community as well. She will go out of her way to complain at the slightest provocation or inconvenience, no matter how much it embarrasses or delays everyone else.

This entitlement may manifest as bigotry, either unintentional or by deliberately profiling people who don't fit her standards of beauty, look different from her, are part of a subculture that confuses her, or otherwise irritate her for any other reason. In this context, the most she'll usually do herself is berate, but she's still dangerous as she can be quick to invoke Missing White Woman Syndrome by claiming victimhood and calling the police (or white gangs, or slave catchers depending on the time period). The idea that she's the one inflaming a problem seems lost on her when she is Feeling Oppressed by Their Existence. This allows her to exact punishment upon anyone she doesn't like while keeping her hands relatively clean, even if she was the instigator or there was no crime in the first place.

She is extremely status-conscious, and makes extravagant purchases to appear very well-off and show off whatever wealth she thinks she has, and will often fight retail workers over the price of whatever she's buying and generally assert her authority over anyone in a service position any chance she gets - she emphatically not Nice to the Waiter. She is usually paired with either a Henpecked Husband who has given up on trying to calm her down, or a husband who's just as obnoxious and entitled as she is and feeds her worst impulses. If she's not openly combative, she's at the very least extremely passive-aggressive, posing as kind and neighborly while judging all the other women in the neighborhood that don't live up to her standards. She often struggles with internalized misogyny. For some reason, she often has short hair, usually an asymmetrical bob. Despite the title, she may not be married, and she may even have a job outside the house, but most examples are privileged housewives since they have enough time on their hands to meddle in everybody's affairs. If she owns a pet, you can count on said pet being a Mister Muffykins, being as ill-tempered, misbehaving, and poorly disciplined as their owner.

Most obnoxious housewives are also depicted as obnoxious controlling mothers, typically the bane of all the other parents in the neighborhood, to whom she'll be both unpleasable and defensive and simultaneously utterly unwilling to mind her own business. She often lives vicariously through her kids' extracurricular activities, usually to get them into a prestigious college—or high school, or preschool, depending on their age—but occasionally to make them stars. She is very concerned with her kids' health and diet but not always sensible about it, tending to fall for the Appeal to Nature when making decisions about food or medicine. She's most likely to start a crusade over anything "offensive" because she thinks it's harmful to her children, who probably just find her embarrassing (or terrifying, if she takes her bad attitude out on them as well). She believes herself to be an Almighty Mom, but she's not actually that effective. Her kids will either be embarrassed at her antics or be Spoiled Brats successfully raised in her image.

There may be sympathetic aspects to this character — perhaps she seeks control over whatever she can because she can't control her marriage or family, or she's suffering from Unfulfilled Purpose Misery, or she wants to venture out of the suburbs but is stuck for some reason. Her insistence that she is a victim for imaginary reasons may mask the truth that she's a victim for real reasons. Many portrayals will run the gamut from being depicted as loathsome villains, or at least Hate Sinks, before undergoing Break the Haughty that results in them losing their social status and developing into something akin to a Jerk with a Heart of Gold.

", emerged in the late 2010s to describe obnoxious (and frequently racist and classist) middle-aged white women. Preceded by the term "Becky,"

for a similarly obnoxious young adult white woman. In fact, this trope predates viral videos of the subject - during the 19th and early 20th centuries, "Miss Ann

" were used in a similar vein. These terms are typically used in an unflattering matter, so No Real Life Examples, Please!.

Could overlap with the idea of a "soccer mom"

, though a soccer mom is usually just a more active '90s style Housewife. If anything she's more beleaguered than entitled.

Her Spear Counterparts include the Entitled Bastard, Schoolyard Bully All Grown Up and Trumplica. When her racism is emphasized, she will usually double as an Intimidating White Presence.

As her name implies, she is the Brandon Rogers embodiment of all of the "Karens" of the world. She picks passive-aggressive fights with random people over pointless minutia, she constantly demands to speak with people's manager, she spams "I don't feel safe" whenever her encounters end with the people she antagonizes turn violent, 911 is the only phone number she has on her cell (and even then she can't "recall the number) and treats parking spaces like Serious Business.

As her name implies, she is the Brandon Rogers embodiment of all of the "Karens" of the world. She picks passive-aggressive fights with random people over pointless minutia, she constantly demands to speak with people's manager, she spams "I don't feel safe" whenever her encounters end with the people she antagonizes turn violent, 911 is the only phone number she has on her cell (and even then she can't "recall the number) and treats parking spaces like Serious Business.