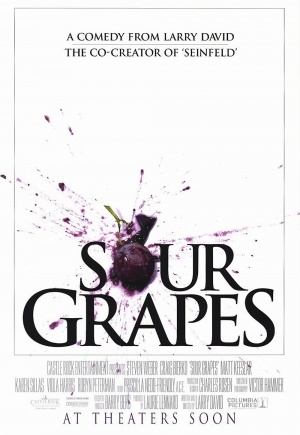 " Sour Grapes is a movie that deserves its title: It's puckered, deflated and vinegary. It's a dead zone."
— Roger Ebert

While gambling in Atlantic City, Richie borrows two quarters from Evan, and scores a jackpot of over $400,000. At first, Evan is happy for his cousin, but soon begins to insist that Richie owes him at least half of the money. The majority of the movie revolves around them arguing over whether Richie owes Evan anything.

As evidenced by the quote above, this was one of Roger Ebert's most-hated films.