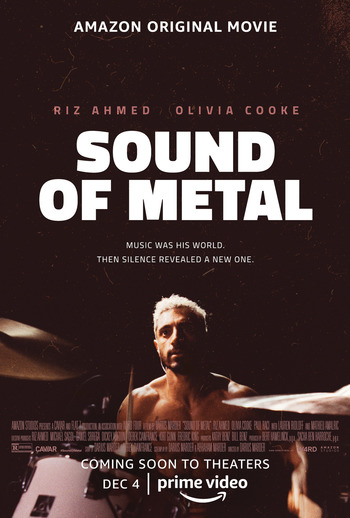 "Everybody here shares in the belief that being deaf is not a handicap. Not something to fix."
—Joe
Advertisement:

The film centers around Ruben Stone (Ahmed), a metal drummer in the avant-garde band Blackgammon with his lead singer girlfriend Lou (Cooke). At the start of the film, the band is touring America in an RV, but the morning after a show, Ruben discovers that his hearing is deteriorating rapidly, and he can't afford the expensive cochlear implants he wants in order to continue drumming. Desperate to help her partner, Lou arranges for Ruben to stay with a house full of deaf community members in order to accept and adjust to his new way of life.

Sound of Metal provides examples of: