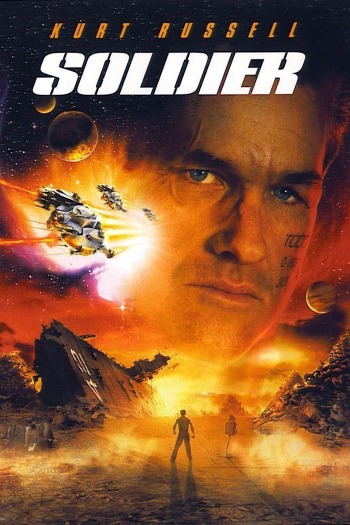 Soldier is a 1998 science-fiction action adventure film directed by Paul W.S. Anderson and starring Kurt Russell and Jason Scott Lee as a pair of futuristic soldiers who do battle on a decaying planet.

Sergeant Todd (Russell) was raised from birth to become a new breed of soldier, and leads an elite commando unit on Earth. Along with his fellow soldiers, Todd has received extreme mental and physical conditioning to become an instrument of war. However, his commanding officer, Colonel Mekum (Jason Isaacs) develops a new group of genetically-augmented soldiers with superior physical abilities and a complete lack of emotions. In the ensuing transfer of control to the new soldiers, Captain Church (Gary Busey) orders a contest between the "old" soldiers and the genetically-modified ones, led by Caine 607 (Lee).

Todd is seemingly killed during the ensuing test (but is actually unconscious) and his body is dumped on the surface of Arcadia 234, a waste mining planet. Although badly injured, Todd manages to make his way to a colony of humans who crash-landed on the planet many years earlier and built their own society. Todd and the colonists begin to work together to survive, but they are interrupted by the arrival of the genetically-modified soldiers, who are taking part in a training exercise and intend to kill the settlers. Together with the colonists, including healer Sandra (Connie Nielsen) and her son Nathan, Todd decides to fight back and protect his new allies.

The film was written by David Webb Peoples, and was intended to be a sidestory/Spiritual Successor to Blade Runner (to the point that multiple references to Runner are seen throughout the film).

Not to be confused with the 1980s movie The Soldier.

This film contains the following Tropes: